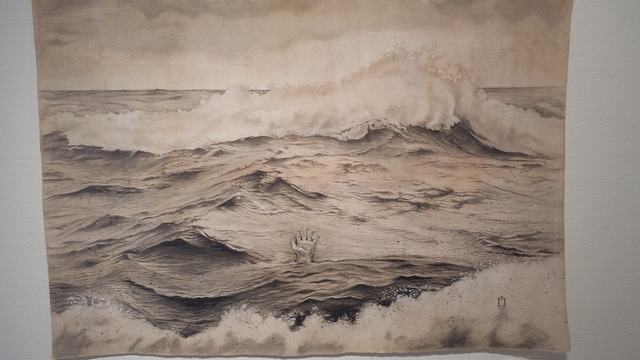 Paint brushes made of human hair and plastic spoons with some colored pencils were all Omid Mokri needed to create his art.

Mokri created his art in prison, using old linens and a concrete cell wall as his easel.

Mokri’s work is on display at the Diablo Valley College art gallery, coordinated by Arthur Scott King, a DVC faculty member, to honor the Mokri family.

“He did this where, with what? How?” said King, while explaining how Mokri was able to create his art with such a lack of resources, “Everyone was blown away,” he said.

The subjects in his works were fellow inmates that displayed a sense of transcendence and redemption.

Mokri’s art borrows from different western styles that celebrates Christian views to convey a sense of unity with various belief systems, which is shown in his piece called”Lost Disciples.”

“Lost Disciples” reflects a combination of Christianity, Islamic faith (the symbol of Allah is above the subject’s head), and even the theory of Evolution. It also includes prison food and a quote from a fellow inmate that we can assume is the subject of the art.

The owl with the hourglass to the left represents wisdom with time, and transcends all forms of belief.

According to Fatemeh Mokri, the artist’s mother, Mokri has been doing art since he was a child, starting off with cartoons.

Mokri would gift art to his sister, “He loved art, for my fifth birthday he drew Mickey Mouse, and my 16th, he drew a portrait of me,” said Arri Mokri, Omid’s sister.

Another piece of art that stands out is Mokri’s “21 Arrows.” The subject is an innocent man who had been imprisoned with Mokri. Each arrow represents a year of the life of the subject, with a tattered American flag hanging on barbed wire.

The eagle and flag represent a sense that the American dream has become tattered and no longer what it should be.

“Silent Scream” depicts a single hand reaching out of the raging sea to display a sense of being overwhelmed.

This overwhelming feeling best displays the metamorphosis of the human condition, and how at times we can all feel like we’re drowning.