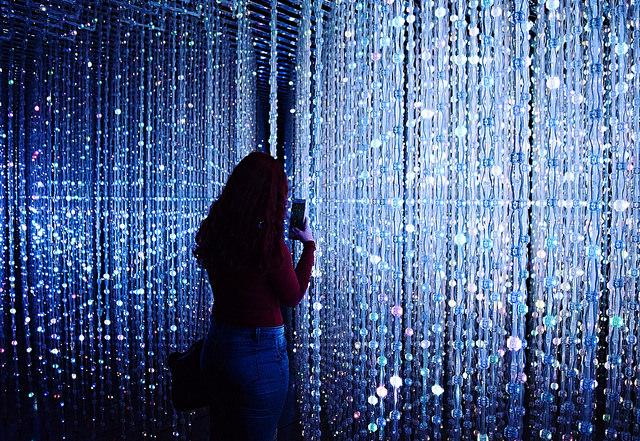 Noora Nimir taking a photo of the Crystal Universe.

The large-scale installation invites participants of all ages to immerse visually in the morphing beauty of the 20 digital works. Participants are encouraged to partake in the digital playground and to explore the intellectual concepts of these technologists at work. The viewer becomes a part of the artwork itself.

“The teamLab exhibition is a momentous one for Pace’s newly formed Art + Technology program. The content and ambitious scale of the show, and teamLab’s practice is emblematic of Pace’s longstanding commitment to experimentation and the growing nexus between art and technology,” wrote Marc Glimcher, who runs the influential Pace Gallery.

TeamLab believes that digital art can create new relationships between people. These interactive works are powerful and several of the works in the show including “Light Sculpture of Flames and Black Waves in Infinity” will enjoy their international debut while other works including “Flowers and People, Cannot be Controlled but Live Together- a Whole Year Per Hour” will be shown in North America for the first time.

“Light Sculpture of Flames” accumulated light points to create a sculptural body. “Black Waves in Infinity” creates a movement of water that is simulated in a computer-generated three-dimensional space. The water is expressed as a continuous body after calculating the interactions of hundreds of thousands of particles.

The interaction of viewers with “Flowers and People, Cannot be Controlled but Live Together — a Whole Year Per Hour” causes the flowers to shed their petals all at once or to come life and blossom again. The work is rendered in real-time by a computer program.

The interactions cause a change in the artwork and previous visual states can never be replicated because what you see will never be repeated again in the future.

Toshiyuki Inoko from teamLab says, “We are honored to share some of our most recently created artworks and hope the universality of their themes creatively, play, exploration, immersion, life, and fluidity will seep into the broader conscience. We are particularly excited to debut several of these works in Silicon Valley, one of the indisputable heartlands for innovation, bold thinking, and risk-taking.”