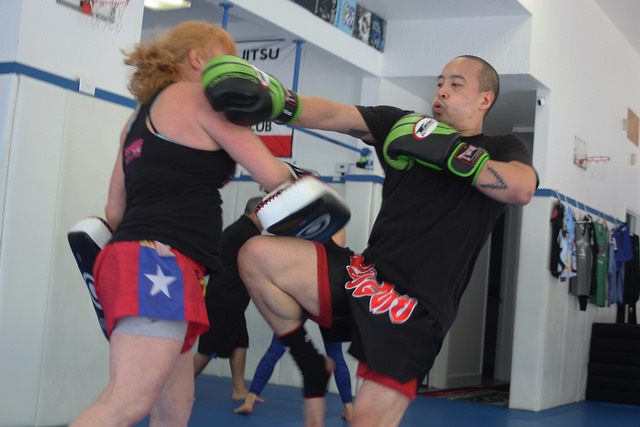 One of the eight striking points of Muay Thai, also known as the "art of eight limbs," is the knee. Here, Nick Vasallo practices his knee kicks at Danville Jiu Jitsu on April 17th, 2017.

Four weeks before the fight, Professor Nick Vasallo set out to cut 18-pounds to make his weight class.

Two weeks before the fight, he broke his nose during training and was sent to the emergency room.

On the day of the fight, he walked away with a medal from his first martial arts tournament.

When he wasn’t teaching music at DVC, Vasallo spent the previous year obsessed with the combat discipline known as Muay Thai.

Muay Thai, as described by Vasallo, is “the art of eight limbs.” It is characterized by striking with hands, elbows, knees and feet. “Every limb on your body becomes a dual weapon… It’s for close combat and distance combat.”

Vasallo believes it is one of the most brutal martial arts to train for. The focus is on the efficient use of powerful strikes to the body. Together with its brutality, it is also a tactical sport; the ability to quickly adapt to an opponent’s technique is key.

He previously practiced Brazilian jiu jitsu, a hybrid of Japanese and Brazilian martial arts that focuses on ground fighting and grappling. His martial arts experience dates back to when he was in college.

But Vasallo made the shift to Muay Thai after he was hit with a shoulder injury in late 2016. While his injured side was recovering, he trained with his other arm.

He believes there are clear parallels between Nick Vasallo the fighter and Nick Vasallo the musician. “To me (Muay Thai) is highly musical because it is rhythmic… and both martial arts and music are both an expression of oneself.”

Practicing martial arts is a process of learning nuances and techniques from other fighters’ styles.

To Vasallo, this translates to music as well. “When I first became a music major I didn’t know how to read music, so I felt like I was always an outsider and it was really humbling. But I was also open to learn from everyone, because I could be a sponge and just absorb.”

Martial arts was similar. “I might be older than all these people, maybe younger. But I’m going in knowing that everyone has their own set of experiences and I can learn from everyone.”

Vasallo traces these ideas back to two sources: the philosophy of musical eclecticism and the fighting philosophy of Bruce Lee. He compared the two in his doctoral dissertation in graduate school.

“Musical eclecticism is about taking all styles of music, any style, and being able to fuse it with your own voice in a singular style,” says Vasallo. The idea is to constantly be learning.

Lee’s fighting philosophy is similar. It centers around a belief in continual growth, progression, adaptation and change. To Lee, a martial artist confined to their own discipline is limited in skill. True skill comes from learning from other styles, then applying to your own.

These concepts are crucial to the nature of musical and martial artists. “If all artists were to cease expanding their horizons then art as we know it would become stale and stagnant,” Vasallo writes.

The connections between martial arts and music don’t stop there for Vasallo. To him, the beauty of martial arts shares an origin with the musical concept of counterpoint.

Vasallo explains that Bach’s counterpoint is, “a confrontation, a relationship between notes giving and taking. Together they are producing this beautiful dance. It’s like magic is happening.”

Bach wrote music where two individual melodies would play side by side, creating something more complex than if the melodies stood alone. If one of the given melodies were removed, they’d be classically beautiful on their own. Yet by playing them together, note against note, counterpoint is created and something truly unique is formed according to Vasallo.

For him, martial arts embodies the same dynamic by, “using another person’s energy and reacting to it. You can meet that force, in a really brute sense, or you can use their force against them.”

He credits his training in Muay Thai to his coaches Stephanie Moon, George Tsutsui and Marty Armendarez who shaped his practice and allowed him to grow.

“(Martial arts) permeates into other parts of your life, it makes you ultimately more confident by learning to do things that you previously thought you couldn’t,” explained Moon, owner of Danville Jiu Jitsu. “You have to want to do it. I think that’s where Nick really excelled is that he has the mental capability to keep it together and do your stuff.”

Both of the arts humble students by forcing them to constantly be learning and always trying to expand their horizons.

“The people that last for the longest and stick to the discipline, they don’t pick it up so easily but they stick to it and they grind it out,” said Vasallo, “I like those students.”

The weeks before the fight were a battle in itself for Vasallo.

He sparred with as many people as he could at his own gym and others while adopting a strict diet to reach his chosen weight class on the day of the fight.

This training and diet regimen was happening behind the scenes for students in his classes. “I was not a happy man all the time when I was on this diet,” said Vasallo. “My students were probably thinking, ‘Why is Dr. V so grumpy today?'”

The biggest setback came when Vasallo broke his nose when sparring. For two days, he counted himself out of the tournament. However, when the doctor gave him the green light, he didn’t look back.

The courage and passion in his preparation paid off for him and all those who provided support on the journey, according to Vasallo.