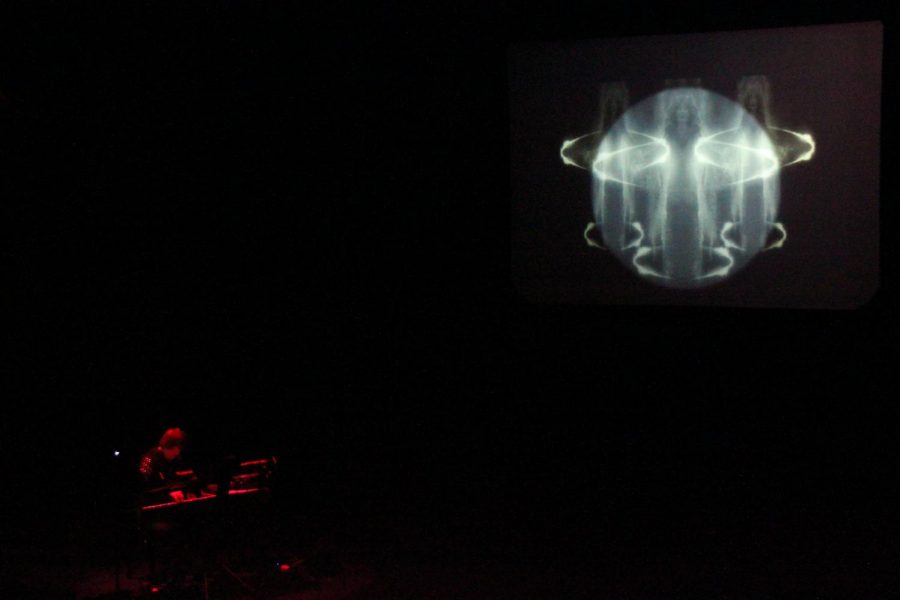 Dr. Bruce Cook presents "The White Goddess" and performs alongside a visual component that illustrated mythological stories on May 19th, 2018 at the DVC Performing Arts Center.

Soaring guitar riffs, rising synthesizers and fantastical lyrics echoed through the performing arts center as Dr. Bruce Cook performed his tribute on May 19 to the Bavarian metal band Atlantean Kodex.

“Epic Myth and Metal – The White Goddess Redux,” explored the topics of death, rebirth and healing through the lens of European mythology and Atlantean Kodex’s 2013 album “The White Goddess.”

Cook was drawn to the band’s use of intellectual themes and mythological stories infused with heavy metal music, “the experience is just spiritually overwhelming.”

“With repeated listenings I became more and more aware that this is a metal masterpiece that will go down in history,” said Cook.

Atlantean Kodex recreates a ceremonial ritual of death and rebirth; this process is the focus of the album.

In the song “Sol Invictus,” Atlantean Kodex references this phenomena. “In this ice-cold Solstice night, death and resurrection await. And summer shall fall on our soil. From darkness grows light, from ashes a fire to conquer the cold.”

Cook spoke about the central idea that sparks his passion for Atlantean Kodex’s album, “the only possible way to have rebirth is complete and total annihilation. In many ways, that’s the annihilation of the status quo, going back to a time when the material world was not such an important factor, looking at ancient traditions that have knowledge of healing and psychology that have really been forgotten.”

Manuel Trummer, guitarist and founder of Atlantean Kodex, spoke about the necessity for Europeans to remember their roots in an interview with the website Metal Crypt. “We need to look to our roots. We need traditions to stabilize our lives in these fast-moving times, something to cling to when all around you is on the move.”

Cook brought up the example of witchcraft, he mentioned that it has become a word that too often calls to mind assumptions and preconceived ideas steered by popular culture.

“For centuries women were the spiritual and physical healers in Europe, possessing extensive knowledge of sacred and medicinal plants and herbs.” Cook elaborates. “This knowledge was appropriated by the patriarchy, the Goddess traditions were forced underground, and ‘modern medicine’ was invented.”

The band originates from Bavaria, a southeastern German state.

“Bavaria is the home to many classic composers, among them, Richard Wagner. And I really feel that this music has inherited that Germanic and Romantic era quality. But has been re-envisioned in a metal context,” said Cook.

When the album began, and the ritual of death and resurrection took over the theatre, the visual accompaniment provided lyrics and symbolic meaning to listeners.

The first half of Cook’s tribute performance was a musical improvisation composed in real time to the imagery.

The ending of both the tribute show and the album is an extended piano solo. As a classical pianist, Cook admired this part of the album, and describes it as “romantic, nostalgic and gorgeous.”

On the day of the show Atlantean Kodex spoke about the tribute show on Facebook, “we really feel honoured to be the subject of such a passionate scholarly project. It’s a wonderful feeling to see how our music resonates with people all over the world in different and fascinating ways.”

Cook also expressed his gratitude towards the band, “They’ve been so generous in allowing me to present their music. I really want to promote the band and The White Goddess. The bottom line is that this piece of music, simply put, is a masterpiece. Without any doubt.”