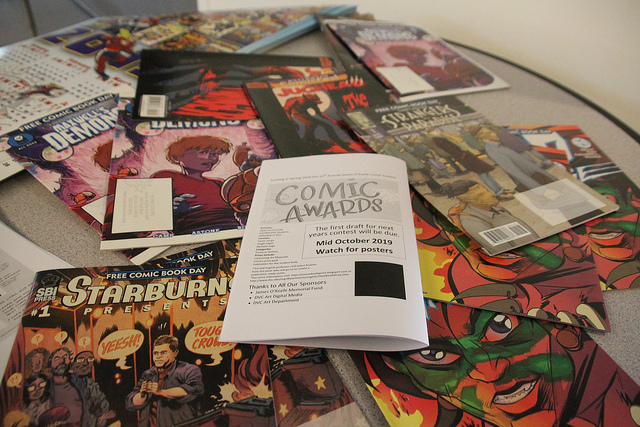 An array of the comics featured in the 9th annual James O’Keefe Comic Contest held on March 19. (Samantha Laurey/The Inquirer).

Talking cacti and a dragon’s pet; bizarre tales from a storefront cashier and the handy manual of a space delivery man. On March 19th, the 9th annual James O’Keefe Comic Contest welcomed all kinds of intriguing characters and stories springing from the minds of Diablo Valley College students. The contest seeks to showcase the creativity of budding amateurs and seasoned artists alike to help forge the second chapter in each of their comical careers.

“(We want to) have a place to honor student creativity, not honor it with just applause but to honor it with money and publications,” said Adam Bessie, English professor and organizer of the event. “We want to have a space to make sure that students know their works are seen and heard, and they should keep making those work.”

The participants from the contest not only earned monetary rewards and drawing supplies, but also one of the most ostentatious rewards known for an artist: recognition. Among the attendees of the event is Joe Field, the owner of the 35 year old Concord comic shop Flying Colors, pioneer of Free Comic Book Day, and a regular speaker of the O’Keefe Comic Contest. Field praised the skill and dedication of the winners, and, quoting the words of legendary comic writer Stan Lee, urged them to continue drawing and writing no matter how old they will become.

Field’s inspiring speech was proceeded by one from special guest speaker Matt Silady. Silady introduced himself as California College of the Art’s comics program MFA chair, freelance editor of several comic publications, and, of course, an avid comic lover. According to Silady, the essence of comic exists in constructing relations between pictures and words, and the success in comic-making stems from the overwhelming passion artists have with their craft.

The award ceremony transpired as applause gradually turned into anticipation. The student’s work was judged by volunteer DVC English and art professors, who evaluated each comic’s artistic and storytelling merit. Participants were bestowed with titles including the Lynda Barry award, the Scott McCloud award, and the Bethany McNaughton award, whose namesakes’ values and styles were embodied by the student’s work.

“We see a sort of kinship between the authors,”  said Bessie. “Our hope is that by calling out these authors — who are very diverse in style, substance, and background — that our students will find new work to be inspired by.”

Bethany Vega, who illustrated “Journey of the Heart”, was given the Ellen Forney award. Forney, a bisexual and bipolar comic artist, specialized in autobiographies exploring her personal identities and crisis. Vega, who bravely narrated her own journey through sexuality, juxtaposing it to the film plot of “Love, Simon”, succeeded the level of self honesty and intimacy Forney was known for. And through this experience, the young cartoonist learned to be confident when venturing outside the comfort zone.

“DVC is such a big diverse campus, and it’s hard to be seen in a college so big — I feel small because there’s so much out here,” said Vega, “The comic contest comes in, and it’s finally something I felt super comfortable with.”

The contest flipped to its jovial conclusion after the award ceremony, yet the journey of these young cartoonists have only begun. Many have resolved to polish their draft for next year’s competition, and many more expressed anticipation for the events in Fall, which included zine-making tutorials, storytelling events, and even workshops in publications.