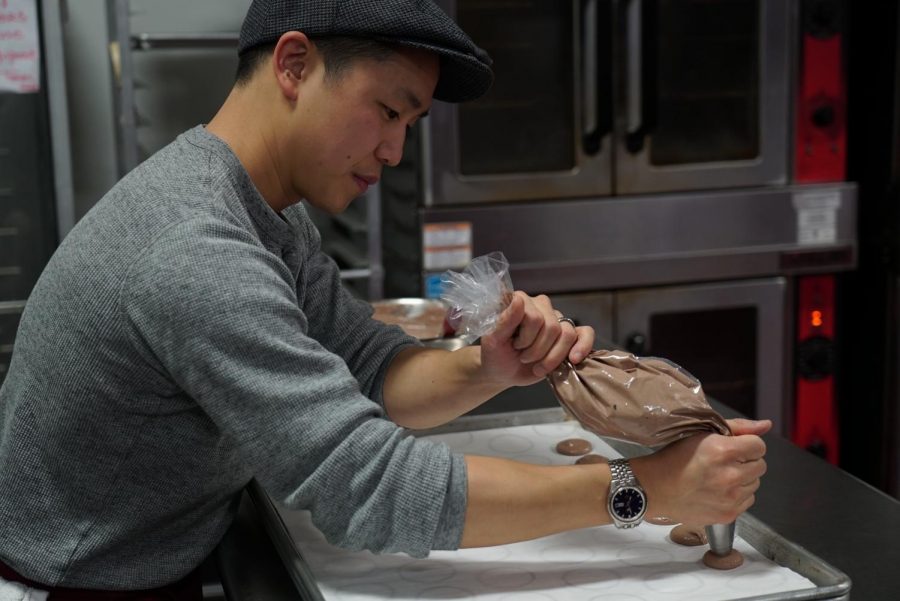 And that is the case of DVC alumnus and pastry chef Evan Lowe; “Evan’s got that passion in him,” said chef Brian McGlynn, one of Lowe’s instructors at DVC.

It’s early Sunday morning and Lowe, a young father, and a pastry chef is already in his kitchen getting ready for another day at the Moraga Farmers Market. Native to this town, he cares deeply about the community, dedicating sales from his small pastry business PaperBox Bread and Pastry only to Moraga so that he can take the time to deliver his very best to locals.

Like many others, Lowe didn’t know how to make cookies at first. He started to work at his first job at Metro Lafayette when he was 16 years old, and when he graduated from Campolindo High School, he knew he didn’t want to spend too many years studying. And so, and because of his previous experience in the culinary field, he was inspired to go into the profession.

Lowe decided to come to Diablo Valley College to pursue his degree in 2008. He started his classes with one thought in his head; he was not going to do pastry.

But life has its own ways, and Lowe ended up having to take a baking class in his first semester at DVC because all other culinary classes were full. And it was in this class where he realized; “Yeah, I’m a pastry guy.”

Ever since then, he fully devoted himself to the craft.

“He put the most dedication into that (pastry),” said chef Christopher Draa, one of Evan’s instructors at DVC. According to his words, Evan was always very serious about his cooking and often came up with his own ideas.

The recipe for the perfect cookie slowly started to reveal itself.

During his time at DVC, he started working at The Wolf in Oakland. It was there where his mentor presented him with a lead to another ingredient for Lowe’s life; “Kings of Pastry,” a documentary about the best French pastry chefs competing for the Meilleur Ouvrier de France, the most prestigious craftsmen award in France. One of the chefs competing happened to be a founder of The French Pastry School, a culinary school in Chicago that Lowe decided to go to for that reason.

“I think he got started here, but got refined in Chicago,” said Draa.

It was at The French Pastry School where he met his wife Crystal in what he calls a “chance encounter.”

The sun has climbed its way above the horizon and the morning fog has slowly lifted when Crystal appears in the door, ready to help Lowe pack up and load the still-warm pastry in their van and drive to the Farmers Market that is to start in about an hour. The well-loved cookies are, of course, part of today’s assortment of pastries offered at the market.

But what’s the secret behind making cookies so delicious that people come back for the time and again every week?

Lowe says that it’s in the salt. It’s important to make it a part of the cookie even though people might not think that salt belongs in something that’s supposed to be sweet. But he knows that salt is what brings the sweetness of the cookie out, just as it does in life.

From Chicago, Lowe and his wife came back to California. For the next few years, Lowe worked in three different prestigious restaurants in Napa Valley, putting in 16 hours of work every weekday. For him, it was a mental and physical battle.

However, he didn’t want to see these struggles as obstacles but as an opportunity to learn.

Draa wasn’t the only one trying to get only the best of Lowe during his time at DVC, and this proved to be a good foundation for Lowe’s time in Napa Valley.

“We were pretty hard on him,” said McGlynn, “(because) cooking is not easy. He was a very quiet guy (but) it was clear that he wanted to learn.”

PaperBox Bread and Pastry, Lowe’s small pastry business, and his famous cookies are the results of his love for the craft and desire to grow and make his life “enriching.”

Even before the Farmers Market officially starts, Lowe has his first customer. Kathy Topete, who sells grapes, stops by to get her cream puff. Lowe welcomes her with his wide smile that doesn’t seem to ever disappear from his face.

“I can only say that he’s so nice,” said Topete.

Since they started to sell at the market, Lowe and his wife have been writing down the descriptions of their customers and what they usually buy. Nowadays, Lowe has memorized the orders of all his frequent customers.

“Jim that comes through; if we have a plain English muffin, he gets it, and he gets eight cookies,” Lowe said.

Besides Jim’s, Lowe remembers the usual orders of many more frequent customers.

“A lot of people come back to see what’s new, and I think that they’re excited when we tell them what we put into it,” said Crystal as she took over the sales.

All the main ingredients are locally sourced, many of them from this very market and Lowe needs to buy the fruit that will become an important part of his pastries.

One day, Lowe would like to open his own brick-and-mortar. But for now, he says he’d like to focus on improving his skills, taking care of his growing family, and bringing only his best to the Moraga Farmers Market.

“I’m the most okay with not having a brick-and-mortar as I’ve ever been before, thanks to the market,” he says.

When the market is over, Lowe and his wife pack up and hurry home to their little daughter. For them, life is just like a simple chocolate chip cookie.

“It’s funny because our favorite thing to make and to eat is chocolate chip cookies. Just a regular cookie, but we kinda go the extra lengths to try to make it something special, you know?”