“They are basically suffocating”: How vaping-related illness kills 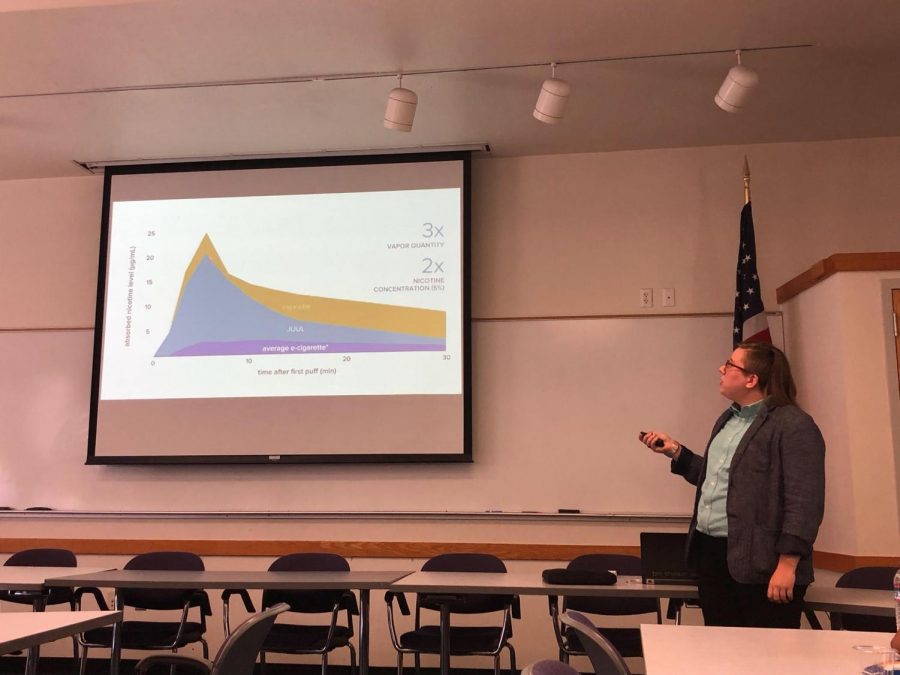 She described the physical course of the illness to better convey the seriousness to students. According to Byrd, the lungs of a vaping person get gradually “covered with a layer of fatty tissue,” which prevents their bodies from absorbing oxygen.

“They are basically suffocating,” she said.

According to The New York Times, vaping has caused 1,299 lung injury cases and 29 deaths across the nation. The youngest person to die of vape-related illness was 17. The Guardian reported on Thursday, Oct. 17, that the vape company Juul will restrict their youth advertising in wake of this.

Given the life-and-death stakes, Byrd recommended that students avoid any form of vaping.

“Whether it is THC, nicotine (or) nicotine-free, just avoid (vape products)… until we can figure out what’s going on,” she said.

Diablo Valley College banned the use of all tobacco products on its campuses, including vaping, in 2017. According to DVC smoking policy, “Smoking, smoking substitutes, smoke inducing devices and vaping are considered a health hazard and are prohibited on all college property.”

The ban was put in place to limit the risk of secondhand and thirdhand smoke. Secondhand smoke is defined as smoke inhaled involuntarily from substances being smoked by others.

Thirdhand smoke is defined as contamination by touching the surface or breathing in the air from an area where a person smoked, leaving a chemical trace behind them. This type of smoke can be especially dangerous for young children.

Although individuals caught smoking or vaping on campus can receive a citation of $25 to $100, some students have noticed people not following the policy.

“I see about two to three people a day vaping,” said Catie Bastible, a DVC student. “I’ve seen a couple of people try to hide it, while the rest are very open about it.”

Some students on campus have become more worried about vaping since reports about the vaping-related illness and vaping-caused deaths have emerged.

“I never really knew all the dangers of vaping, but now I’ve become more concerned, especially with the safety of my kids,” said student Cassandra Lebeau.