Gawk back at your gawkers: Eli Clare speaks about resistance 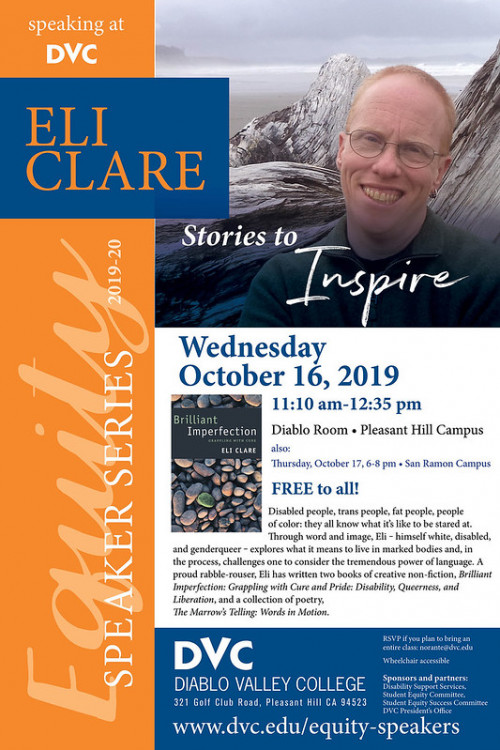 Eli Clare spoke at DVC about disability, queerness, and dealing with being stared at. (Photo courtesy of DVC)

How do you deal with people who stare at you? Embrace your authenticity and stare back proudly: that is the message Eli Clare, a disabled genderqueer speaker, writer, activist, and poet, shared on Sept. 16 at Diablo Valley College.

It took him some time to find his own way of dealing with people who gawk at him. Clare used to feel ashamed and judged because of his appearance and his sexuality. But nowadays, he stands proud and strong in response to their stares.

“These days, I practice gawking at the gawkers as an act of resistance,” he said.

His strategy seems to be working.

“It usually only takes one long glance at the gawkers,” Clare said. “Kids on their way home from school, old women with grocery bags, young professionals dressed for work. One unflinching glance and they turn (away).”

Daniel Manzo, a DVC student who has read Clare’s books, and a member of the LGBTQ+ community, found this part of Clare’s talk especially inspiring.

“It not only is very transformative, but very liberating; turning gawking and staring into something we could embrace,” they said.

Clare elaborated on this strategy when a student asked him if he, after all this time, still cared about people staring at him. Clare said that if people were going to stare anyway, he would give them a fabulous reason to do so as an act of resistance.

“If you’re going to stare at me, I’m going to look my frickin best and you better look,” he said.

Clare addressed the current political climate in the United States in connection to resistance. He emphasized how much social change is happening today.

“This talk is happening … at a time of tremendous political upheaval,” said Clare. “But we’re also living in times of tremendous resistance.”

Clare said that he hasn’t seen this much resistance in the United States since the 1960s Civil Rights Movement.

He said he wishes language would evolve to break binary standards.

“One day we might have a language that will take us to the world that is neither masculine nor feminine,” he said. He hopes that we can build a world “where our bodies become home.”

Clare said he believes this goal can be achieved, among other ways, through art, specifically poetry.

“The role of art in resistance is really important… We are not going to find the world we want to live in without dreaming and using our imagination,” he said.

Clare then asked his audience to form small groups. In those groups he encouraged the participants to share their experiences; have they experienced being stared at? How did it make them feel? How did they deal with it?

“This conversation can get tender very quickly,” he said.

Clare made sure that the participants knew what the point of the discussion was: sharing and listening, not giving unsolicited advice.

The room filled with hushed voices sharing their experiences, sometimes tender, sometimes painful, and at all times confidential.

“Eli Clare did an excellent job with creating a safe space,” said Manzo.

Manzo is a part of community pride where they read literature written by queer and transgender authors.

“We set time aside reading Eli Clare,” they said. “It was really nice that he came and brought it to life.”