Undocumented Student Week highlights the anxiety of being an immigrant student 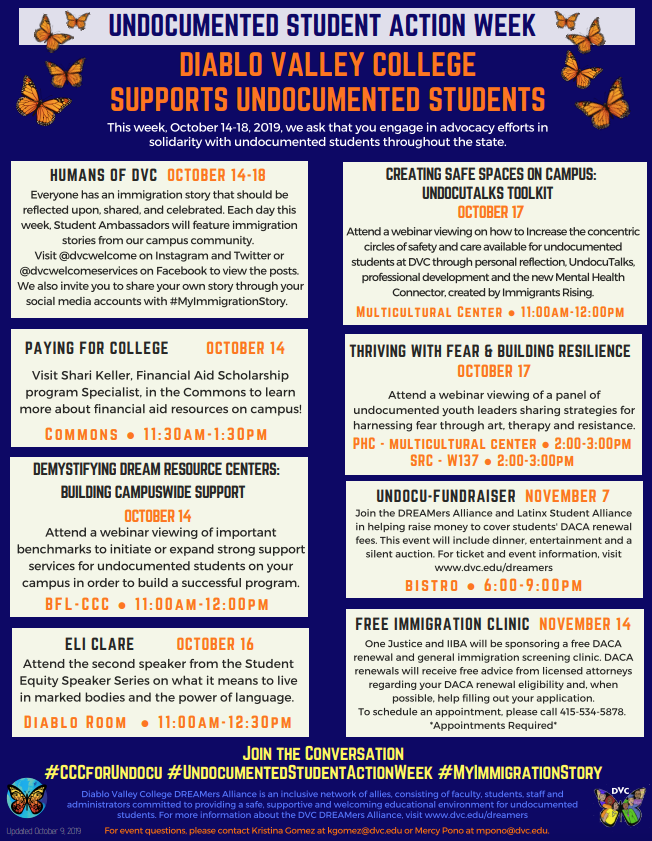 The Undocumented Student Week schedule that was hosted by Diablo Valley College. (Photo courtesy of DVC).

Martin’s parents migrated to the United States from Mexico. They wanted Martin and her siblings to “have access to education,” Martin said, speaking on Oct. 15.

But this move came with a price.

“They have a fear of being found, identified, (so they’re) living in the shadows,” said Martin.

Anxiety affects immigrants’ mental health, too. According to the US National Library of Medicine, “undocumented Mexican immigrants are an at-risk population for mental disorders, particularly depression and anxiety disorders.” Moreover, 23% of the population living near the border is at risk of developing some kind of mental illness, such as anxiety and depression.

“The fear of being deported and detained could really affect our mental health, which could lead into illnesses such as depression and anxiety,” said Campos.

She crossed the Mexican border with her family when she was eight years old and didn’t gain her permanent residency until 13 years later in 2018.

Campos said that undocumented students constantly feel the need to validate themselves at school. According to Campos, students think they have to prove that they deserve to be at school, and work harder to gain opportunities than their documented peers. Many undocumented students have faced discrimination such as being considered intellectually inferior by their teachers and classmates.

For recent arrivals, simply showing them that they belong is a good start, according to Campos.

“They want to feel a sense of belonging,” said Campos. “What we could do is realize that what these students are experiencing is … not due to something being wrong with them.”

Across various college campuses, Campos and her team have been creating safe spaces for undocumented students to share their experiences and support one another. Campos said these group gatherings often turn into support groups. She also mentioned that these groups are facilitated by people who have experience working with anxiety and depression.

“The most important (thing) to know is that healing really happens through connection and community building,” said Campos.

Actually showing up to these group meetings and putting themselves out there is a challenge in itself for those students, according to her.

“Students fear coming because these groups could be targeted,” said Campos. “It takes time to build trust with these students. We have to tell them why we are doing this and what it means to us”.

One of the questions students asked during the presentation was how documented individuals could help undocumented students feel safer, and create a more welcoming space for their schoolmates.

“The most important thing is to build trust with them by acknowledging their fear,” said Campos. “They will most likely open up to you more.”

There are many ways for undocumented students to gain access to mental health support and other resources. One of those is on the Immigrants Rising website.