White Pony Express: Helping others in need in Contra Costa 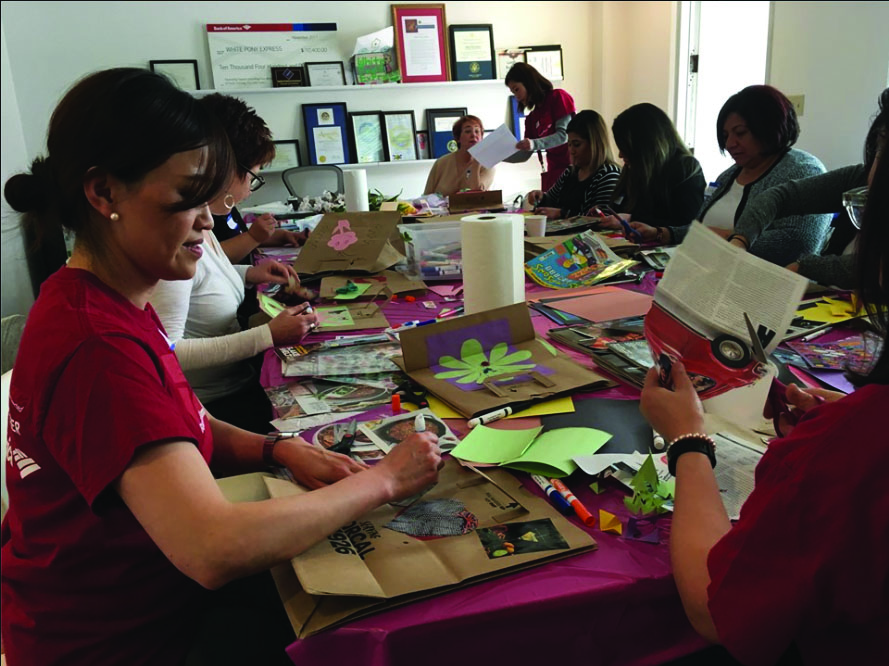 It’s 8:40 a.m. on a chilly Saturday morning as I step out of my car and shuffle into a vast garage snuggled away in the quiet suburbs of Pleasant Hill. I’ve arrived at the headquarters of White Pony Express, a volunteer-driven nonprofit organization with one main goal: to end poverty and hunger across Contra Costa County.

Inside, I greet some of the friendly staff and volunteers before joining them to sift through boxes of food that have been shipped to White Pony from various markets. Fruit goes in boxes labeled “Fruits,” vegetables have a box of their own, and so on.

This isn’t the only job I’m involved in. I also sort out women’s tank tops in the general store section of WPE, which houses other clothes brought in from donations and department stores. These clothes will be redistributed and sold at boutiques.

Most college students like me would sleep in for the weekend. The only thing that’s keeping me awake this Saturday is knowing that my efforts will help feed someone in need. I’m also gaining leadership skills when I actively search for ways to help my fellow volunteers with tasks outside of food sorting, and participate in public events – like tabling with staff at Pleasant Hill’s Art, Wine & Music Festival – to help promote WPE.

Radman Torzarbock is a new friend I met here and a student at The Athenian School, a private preparatory school in Danville. An energetic young man with dark eyes and a warm smile, he says he had the same mindset when he first joined WPE.

“I’ve been here for about five months,” says Torzarbock. “When I first started, I spent time in the general store and the food sorting center. I found working on both sides very meaningful to me.”

“It makes me feel good about offering my abilities, talents, skills and time to help others,” he adds. “I’m aware that I’m making a real impact.”

After working at WPE during the summer, Torzarbock was offered a position as a “navigator” helping guide trucks that pick up unwanted food from grocery stores. He goes out at 7:30 a.m., heading to markets to help load boxes with food. Then he takes the food back and helps get it sorted at the center.

Torzarbock initially found out about the organization through the Sufi Center in Walnut Creek, which recommends students to summer volunteer programs. He feels that his time at the organization, and what he has gained from the experience, was worth the investment.

“Every time I lift up a crate, I’m like, ‘This crate is heavy, 40 pounds at least.’ But this means people are going to eat 40 pounds of food that they otherwise wouldn’t have gotten,” he says.

White Pony Express was founded in 2013 by Dr. Carolyn Wynn Conner, a spiritual advisor at Sufism Reoriented, who became aware that some of her friends were going hungry in a country with so much abundance. Conner came up with a solution: why not pick up surplus food from stores and redistribute it to a 501k organization to help those in need?

In the years since, her organization has annually helped an estimated 80,000 Contra Costa County residents. It has collected and delivered some 10 million pounds of food to people and distributed more than half a million clothes, books, toys and other items.

Kim Hunter-Reay is a charming elderly woman who is part of the WPE staff and is one of the friendliest members at WPE, greeting me every Saturday enthusiastically as though I am family. She works in community relations and says she came across the organization by chance.

“I heard about WPE through word of mouth,” she says. “First from my neighborhood, and then through the Sufism Reoriented program. I first did volunteering with friends and then got more involved.”

In the beginning, Hunter-Reav’s main role was to reach out to stores for clothing donations. Now she does community outreach to other charity organizations helping people in need. Lately, she has been working in food distribution, bagging food for people with specific allergies and dietary needs who can’t afford the food themselves.

Hunter-Reav says that after encountering people in different crises, such as those suffering from homelessness or unmet medical needs, her best satisfaction has been seeing people regain stability in their lives as they start to receive basic care. She has also invited friends to pitch in and sort food, package by package, spreading the sense of community aid.

“There’s a happy camaraderie in people here, so that’s contagious,” she tells me, and “by the end of the day it ends up being fun.”

“You could just feel his happiness”

Mandy Nakaya, manager of WPE’s volunteer service program, has been here since the group’s inception. When I first visited the group for orientation a few months ago, Nakaya spoke to me in a passionate but gentle voice that made me and the other new volunteers feel comfortable in the unfamiliar setting.

Nakaya’s mission is to recruit as many volunteers as possible for food and clothing distribution. To that end, she leads orientations, attends events, visits high schools and colleges, and talks to people about all the volunteer opportunities available at the organization.

Last year, WPE helped set up a food pantry in a local school, and now more schools have joined the cause.

“What’s most important is that families can provide for their children who can then have a better attention span because of the food,” says Nakaya.

Stamping out hunger entirely in Contra Costa County may be daunting, but the non-profit is making inroads as an effective “middle man.”

“We’re the ones who transport the products for different organizations and churches (that) don’t always have the ability to pick up the food,” she adds.

Nakaya says WPE prioritizes delivering fresh produce to the poverty-stricken. Sure, the bananas tend to be more on the yellow-brown side, but as I pull out a package of butternut squash noodles – a staple in the food bin – I see that it hasn’t reached the expiration date. WPE tries to redistribute its food within two hours of pickup, emphasizing the importance of getting it to people when it’s still fresh.

For Nakaya, the simple act of talking to people and hearing their stories makes her job continuously interesting and inspiring.

“I remember going to a boutique in Richmond,” she says, “and I’ll never forget meeting a gentleman who had the biggest smile I’d ever seen. You could just feel his happiness.”

“I asked if he needed any help, and he immediately said, ‘I work two jobs, and my wife works one. We can’t even afford to buy clothes for our children when they go back to school. I am so happy that they’re going to have new clothes.’”

The high cost of living in Contra Costa, like across much of the state, is a big factor keeping many people from escaping poverty, even when they work multiple jobs, she says. Some people don’t take all that they might need from WPE because of pride, or because they know there are other people who need the items more.

One time in Martinez, Nakaya recalls, “The guests were invited to come to the White Pony Express truck, which we’d filled with sleeping bags, sweaters, coats, and everything to keep warm.” But not everyone took the items.

Nakaya had to learn a few things while working with people in difficult situations. She says that when offering jackets to homeless people, she would give them jackets in their size, though people would always ask for jackets that appeared too large for them. Then, one day, someone explained it to her.

“Finally, somebody came up to me and said, ‘You really don’t understand, do you? When you’re homeless, you put every piece of clothing item on. Then you top it off with an oversized jacket to stay warm.’”

As I exited the White Pony Express after almost two hours’ worth of sorting, I saw a box of bouquets hauled in from Trader Joe’s. It was placed near the garage, up for grabs for any volunteer who wanted to freshen up their kitchen table. For me, it was almost like a sweet reward for having taken the time that morning to help people.

At WPE, I realized we’re not just redistributing food, but also love. And the next week, I was back for another shift.