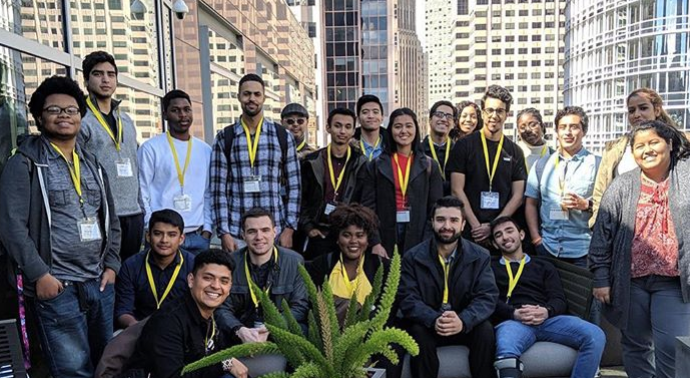 As a 19-year-old biology major, Karin Pal spent the beginning of her first semester at Diablo Valley College simply shuttling between classes and home. She felt isolated, and knew she was not alone in the experience.

“A lot of students come here like that,” said Pal. “They have a perspective on school where ‘all you do is come and go,’ and that easily changes if you have a community and actually enjoy coming.”

So Pal decided she would try to build one. One day, while struggling with her math homework in DVC’s Math Lab, Pal was introduced to Adeola Morren, an international student from Holland and the captain of the basketball team.

“He dragged me to the PUMA center,” recalled Pal. “He took me with him and said, ‘Just come study here.’” Soon, Pal, Morren and other students at PUMA were discussing lack of representation for students of color in STEM classes, and the resulting disconnect they felt at DVC. They started to brainstorm, and “that’s when the club started forming.”

What resulted, in Fall 2018, was the creation of STEM in Color, a club committed to empowering underrepresented groups in science, technology, engineering and mathematics. Morren, who is now a computer science major at University of Southern California, assumed the role of club president while Pal became vice president.

“Before all of this, I was very introverted. I was shy, and STEM in Color was the first leadership role I had taken,” said Pal. At one point, Morren encouraged Pal to email some tech companies in an effort to build connections. When businesses like Zoom, the video conferencing service, asked to video chat with Pal, Morren helped her draft a list of questions to ask in the call.

“It was just a push I needed to stop being so shy and just do it,” she said.

Nowadays, Pal gives other club members that same kind of nudge, helping them take on greater leadership roles and pursue contacts in the STEM community—for example, encouraging one of the club’s members to coordinate a field trip to the San Francisco office headquarters of Slack, the workplace instant messaging service.

Through club-hosted study sessions, field trips to tech offices across the Bay Area, video conferences with STEM professionals, and other social events, STEM in Color has since provided a growing opportunity for students across DVC to build friendships and feel they are part of a bigger social, academic and professional community.

Led primarily by students of color, the club emphasizes that it is open to students from all backgrounds as it seeks to build a diverse community where club members unite around their common purpose to study and learn from one another.

For first generation Americans like Kevin Arredondo, a son of Mexican immigrants, the club is an inspiration and social outlet. A 20-year-old biology major, Arredondo entered DVC hoping to attend art school and didn’t think STEM was in his future. No one in his family had pursued STEM careers and high school science had proved difficult for him.

During his first semester at DVC, however, Arredondo took math and nutrition courses to fulfill general education requirements. Suddenly, his perspective changed.

“I had this pull towards science,” he said. “Nutrition was interesting because it combined chemistry and the human body.”

Gradually, Arredondo gained an interest in the medical field. He took more science classes, switched majors, joined DVC’s Math, Engineering, and Science Achievement (MESA) program, and volunteered at a hospital. By his third semester, Arredondo said he knew he wanted to be a physician.

“I realized I wanted to help people, and that I could do that with a STEM degree,” he said.

Socially, however, he faced challenges. Arredondo spent much of his time studying alone in the PUMA center, feeling too shy to engage with his peers. This changed when he heard about STEM in Color.

Since joining the club, he said his communication skills have improved and he feels a new sense of community on campus. “I’ve met my closest friends through STEM in Color,” Arredondo said.

“In STEM it can be easy to say, ‘I don’t got time for friends,’ but STEM in Color gives me a place to connect.”

Computer science major and the current STEM in Color president, Carly Gordon, also arrived at DVC looking to find a community. During her first semester, Gordon’s linear algebra teacher recommended she visit the PUMA center, and once there, Gordon stumbled into Morren who suggested she join STEM in Color.

As a former mechanical engineering major at Howard University, an all-black college in Washington, DC, Gordon said she was less attuned to the struggles of minority students when she left that college and arrived at DVC.

She said her negative experiences at Howard had more to do with her gender than her status as a person of color.

“When I was at Howard, I would talk about some of my experiences as a woman at that college, and guys would be like, ‘You’re just a feminist,’ and ‘That didn’t really happen,’ or ‘It’s not a big deal,’” said Gordon.

When guys sexualized or harassed her and other women in the lab, she said it was viewed as normal behavior.

At DVC, Gordon found a more hopeful environment with STEM in Color. Upon meeting Morren, she immediately got involved with the club, knowing she wanted to help broaden STEM opportunities for other underrepresented students like herself.

Influenced by her experiences at Howard, Gordon said she hopes to promote not only racial diversity, but also diversity in gender, gender expression, and sexual orientation. She emphasized the need to identify all minorities in STEM fields and assess how their identity affects their experience as a student or employee in the workplace.

Ultimately, Gordon said STEM in Color welcomes all DVC students. “Whether white, female, person of color, whatever, I want (the club) to be a reflection of what we all want diversity to look like.”