How DVC’s Music Industry Program Responded to the Pandemic 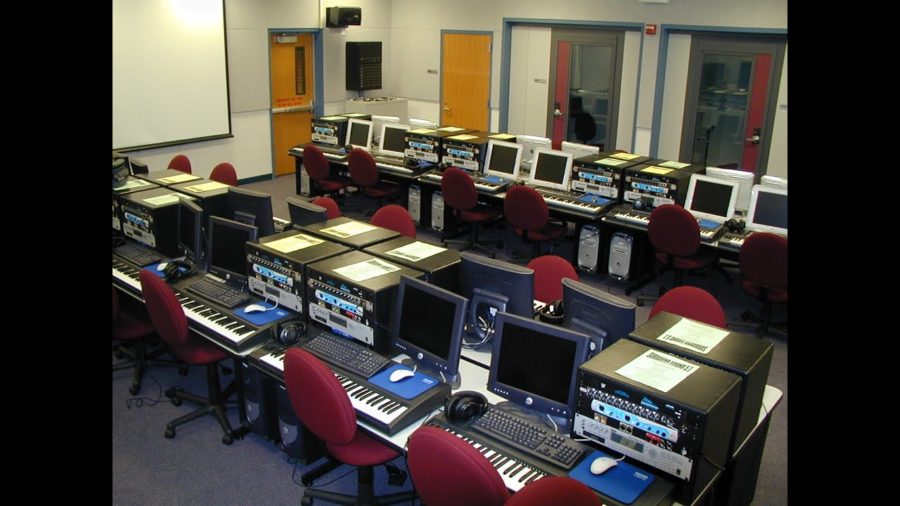 Like most things at Diablo Valley College, the Music Industry Studies program has been online since the start of the pandemic. But teaching music isn’t something that happens naturally over Zoom. As a result, the program has had to adapt in a number of ways.

According to its website, DVC’s music industry program ranks 10th in California, with a Music Technology Center that boasts equipment including a “fully networked lab equipped with iMac workstations.” Since access to this technology is essential for most classes offered in the program, some have done well in an online format.

“Any of our music literature courses have always been healthy,” said Nicholas Vasallo, who directs the program. But at the same time, classes that are more interactive have been struggling, such as audiovisual essentials, live sound, and a class that teaches students the ins and outs of the digital audio workstation Reason – all courses that have been cut due to the pandemic.

Digital audio and media professor Doug Michael noted that while the first two classes that were cut will return after the pandemic, the course on Reason may not, because “it has been a declining software.”

According to Vasallo, some students were unable to finish their audio visuals degree this year due to their not having access to the AV essentials and live sound classes.

At first, all of the program’s classes were on Canvas when the pandemic hit, which Michael said was challenging in and of itself. This is because many of these courses are collaborative and require the use of various types of software and equipment. “Software’s always changing, there are new techniques, and new artists coming up,” he said.

Recently, Michael said he has had some success doing a Zoom and Canvas hybrid, which helped students share their projects with each other and collaborate – a core part of many of these classes.

Michael said the beginning of the pandemic was especially difficult because it was hard for students to pay for the software required for their classes. While many companies, such as Cubase, a digital audio workstation, were giving discounts to students, some students still couldn’t afford it. Other students were even struggling to access a computer at all.

Vasallo said that DVC is offering some openings in the Music Technology Center for those students moving forward. Access to the MTC allows students to use the recording booths and iMacs to produce their music. The center is socially distanced, only allowing up to seven students at a time.

In addition, Digital media purchased laptops before the pandemic, which are now available for students to check out, containing all the downloaded software they need for the music classes.

According to Vasallo, in Fall 2020, the program saw more than a 15 percent decrease in enrollment. Michael said that some students have made the decision to not to enroll in these classes until the pandemic is over. “We are hoping by [this] fall [enrollment] will pick up, so we can do a hybrid,” said Vasallo. “I’m optimistic.”

Explaining the practicality of a music industry degree, Vasallo said, “I think music industry studies has such a wide variety of career paths. I was an MIS major way back, 20 years ago. We thought the only way to make money was to be a rockstar, [but] there are so many other ways to make music.”

He added, “If you love to be creative and you want to learn how to make money or how to create music, this is a great degree for you.”