“Which Lives Matter and Which Deaths Don’t”: Professor Jallicia Jolly Talks Racial Justice and the Pathways to Systemic Change 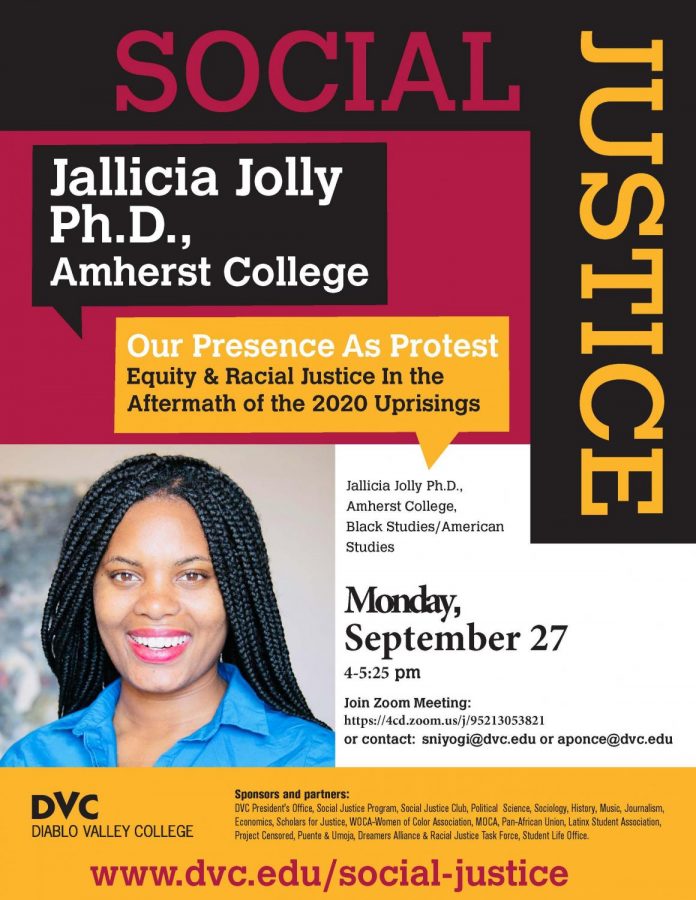 The death of George Floyd in May of 2020 ignited a “racial uprising” in America, fueling nationwide protests and catalyzing the Black Lives Matter movement, according to Dr. Jallicia Jolly, a professor of Black and American Studies at Amherst College in Massachusetts.

As a result, “for the first time in history, institutions and corporations were willing to educate themselves on the past and present evils of racism,” said Jolly, who addressed Diablo Valley College students and faculty last month at the first Social Justice Speakers Series event of the fall, entitled “Our Presence as Protest: Equity and Racial Justice in the Aftermath of 2020.”

“We saw unprecedented verbal commitment to anti-racism by academic institutions and companies like Nike, Starbucks, Ben & Jerry’s and Victoria Secret,” she said. However, “There are [still] not many mechanisms to recruit and retain diverse people of color at the highest levels of power.”

In academic settings specifically, Jolly said society needs to empower students and community members to “critically engage and navigate systems of power within the college, university and beyond.” This will require building meaningful coalitions, actions based on solidarity, and institutional accountability to produce structural change.

She warned that growing attacks on the teachings of Critical Race Theory are part of a broader, calculated assault against expansive views of racial justice. As rightwing activists continue in their attempts to gag anti-racist education, while spreading misinformation campaigns online and in the streets, Jolly said society must push back in order to make racial justice a reality.

Pointing to present-day ramifications of racist policies, she highlighted the convergence of COVID-19, xenophobia, global anti-blackness, and racialized violence that have forced society to ask a now-poignant question: “Which lives matter and which deaths don’t?”

Jolly urged individuals and community members to stay vigilant in their pursuit of racial equality, saying, “This is not just an intellectual exercise… It involves a communal practice and a solidarity of action that is organized beyond institutions.”

She added, “These calls require a revolutionary imagination that sees far beyond immediate circumstances.”