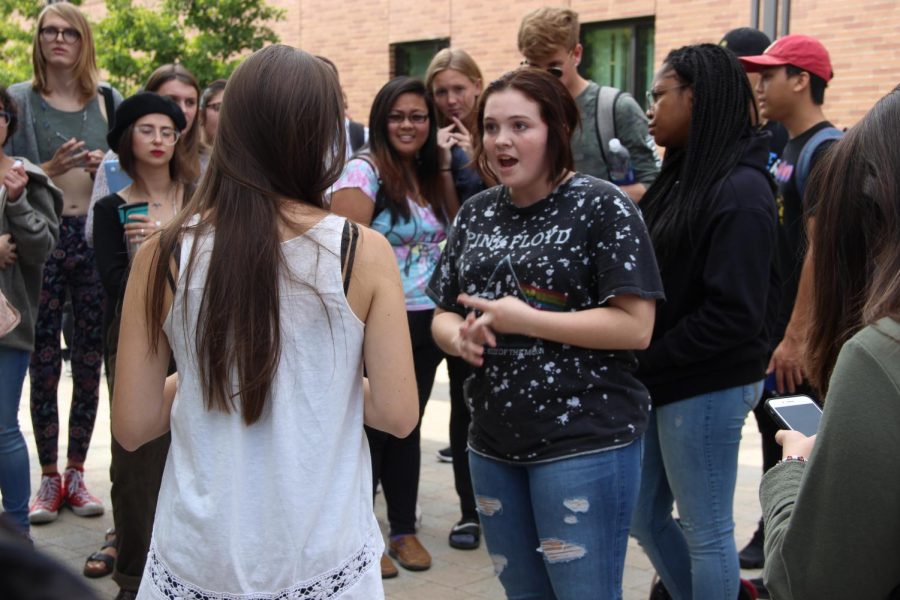 Shield of the Unborn visit the Commons at Diablo Valley College on Oct. 16, 2017

In April, the administration of UC Berkeley came under fire for its response to a planned visit by conservative commentator Ann Coulter. It wasn’t an isolated incident: just two months earlier the university had cancelled an appearance by former Breitbart editor Milo Yiannopoulos. Berkeley faced widespread backlash in both instances, with political figures and commentators both conservative and liberal, accusing the administration of stifling free speech and expression as protected by the First Amendment.

These accusations against Berkeley speak to a larger debate that has been raging inside collegiate institutions for decades: the role of college administrations in establishing guidelines about student discourse, and their right in policing such guidelines.

Diablo Valley College political science professor Scott MacDougall says that college administrations have a duty to weigh the exercise of students’ right to free expression against its societal impact.

“The purpose of a school is learning,” MacDougall said. “It is possible that the exercise of your free speech might get in the way of the learning process, and if it does, then the school can restrain it.”

The definition of an impaired learning process, and therefore the leniency with which administrations treat students’ free speech, has changed drastically over the last few decades.

UC Berkeley has been a battleground for this debate since the mid-1960s, when the Free Speech Movement led to the campus softening its strict regulations on on-campus political discourse, and causing a fundamental shift in how political discourse was conducted on campuses throughout the United States.

“The Free Speech Movement of the 1960s was crucial in advancing the speech rights of students across the country,” wrote Berkeley Law dean Erwin Chemerinsky in an editorial for the Daily Californian.

Chemerinsky admits that the context has changed. “Now, students’ protests are about speakers from off-campus, such as Ben Shapiro, Milo Yiannopoulos and Ann Coulter,” he said. At the heart of the issue, he claims, is the ever-evolving definition of “hate speech.”

Schools tried to combat these problems in the 1980s and 1990s with the adoption of speech codes – in-house regulations on acceptable speech designed to prevent discriminatory harassment and violence. Many of these speech codes proved to be flawed upon execution, oftentimes overly vague. Their vagueness, in the eyes of some, gave college administrations too much power to restrict student discourse.

Today, UC Berkeley is given a speech code rating of yellow by the non-profit student rights organization Foundation for Individual Rights in Education (FIRE). Yellow, according to the organization, indicates policies that “restrict a more limited amount of protected expression (compared to a red rating) or, by virtue of their vague wording, could too easily be used to restrict protected expression.”

How far administrations are allowed to go in defining and restricting hate speech is the crux of the debate. As the National Coalition Against Censorship (NCAC) argues, “modern Supreme Court decisions (particularly Hazelwood School District v. Kuhlmeier and Bethel School District v. Fraser) have made it clear that the right to free speech and expression can sometimes be subordinated to achieve legitimate educational goals.”

According to the New York Times, Berkeley spent an estimated $600,000 on security for Mr. Shapiro’s controversial speech in September. A similar figure was spent to secure the campus for Ann Coulter’s visit in April. The visit was cancelled before Ms. Coulter’s expected appearance.

While Mr. Chemerinsky feels that Berkeley Chancellor Carol Christ was correct to spend the money to ensure student safety and protect the university in the eyes of the First Amendment, he claims that “these are dollars the campus can ill afford and inevitably will detract from the instructional mission of the school.”

While Berkeley has been at the public center of the debate, public colleges and universities all around the country, including DVC, are grappling with similar problems. Namely, how to uphold students’ rights to free expression and allow potentially controversial opinions to be heard on campus while also ensuring student safety and meeting educational goals.

DVC, being a publicly supported community college, is subjected to California Education Code 76120, which requires that community colleges in the state adopt rules and regulations that “(do) not prohibit the right of students to exercise free expression,” except for “expression which is obscene, libelous or slanderous according to current legal standards, or which so incites students as to create a clear and present danger of the commission of unlawful acts on community college premises.”

By all accounts, DVC has handled controversial events well in the aftermath of Berkeley’s issues, albeit with a much smaller sample size.

The visit of controversial pro-life group Shield for the Unborn in October went smoothly, and associates of the organization were complimentary of the administration at DVC.

“It was actually easier than other schools,” said Students for Life of America representative Anna Arend, in regards to the process of getting permission to distribute materials and set up displays in the Commons.

According to Todd Farr, program manager of Student Life at DVC, “all tabling requests for ‘Free Speech’ events on campus go through Student Life for approval. Shield for the Unborn followed this process.”

The process, however, as Berkeley has learned the hard way, is not always so cut and dry.

There’s no one right answer,” MacDougall said. “There’s no ‘all yes’ or ‘all no.’ It’s kind of one of those things that you need wise people to manage as it happens.”

This news feature represents part three of the Inquirer’s multi-part series covering free speech on public campuses. Contributions to this article were made by Frank Guitron, Mahrukh Siddiqui and Kayla Rojas.