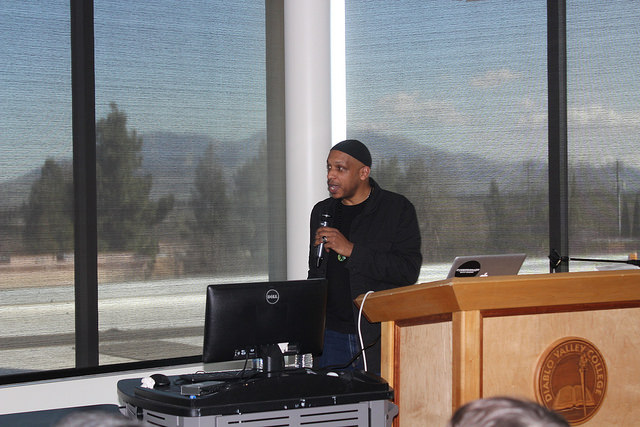 The Black History 101 Mobile Museum made a stop at Diablo Valley College for Black History Month on Wednesday Feb. 21 as part of DVC’s Equity Speaker Series.

This mobile museum is a “collection of over 7,000 artifacts of original Black memorabilia dating from the trans-Atlantic slave trade era to hip hop culture,” according to the museum’s website.

Curator Khalid El-Hakim has been taking his museum around since 2006, with the pieces of the museum focusing on all aspects of Black culture and treatment.

El-Hakim set up his museum in a way to show that racism existed not so long ago and still exists today.

Speaking about El-Hakim’s approach to creating the Mobile Museum, criminal justice major Elliott Hines, 27, said, “It helps break it down so that we can better understand how it got that way and how we can avoid it in the future.”

“How do we celebrate somebody if we’ve never read his work,” said El-Hakim, after asking the audience if anyone had ever read celebrated civil rights activist Martin Luther King Jr.

El-Hakim also mentioned how businesses and media will appropriate the likeness of certain icons of black culture and use them for personal gain.

El-Hakim also mentioned the infamous H&M incident that happened earlier this year with the “coolest monkey in the jungle” criticism.

His lecture also touched on the coded messages in the English language, such as people’s association of black with negative and white with positive and clean.

A lot of what has inspired El-Hakim’s work was influenced by various Black hip-hop artists including Public Enemy.

“Through the lens of hip-hop was how I was introduced to the Black Panther Movement,” said El-Hakim.

Another focus was on how oppressors have no problem documenting atrocities because they believe the people they are harming are not equals.

El-Hakim compared a picture of white people celebrating a lynching to how the Germans during Nazi Germany would collect the names of the Jews they were going to kill.

“Racism is learned,” El-Hakim remarked. He discussed how a man named Charles Carroll wrote the book “The Negro a beast; or in the Image of God” back in 1900.

Hakim stated how this popular book influenced a lot of white people’s opinions on how to treat black people in the early to mid 1900s.

In addition to El-Hakim, Professor Griff from hip hop group Public Enemy came on stage to discuss his thoughts on racism in America.

Professor Griff described his work with Public Enemy by saying that in its conception, “we needed to speak the truth to power.”

To help spread Griff’s message they created what he referred to as “organized noise,” by “combining African drum beats to European word” in order to make people think about his lyrics instead of just the beat.

Griff went on to mention that the ease of access to the internet has made us less accountable for our actions, which contributes to appropriation of culture and art, which is not helping racial tension.

“No one is being accountable to their lyrical content or their actions,” said Griff.