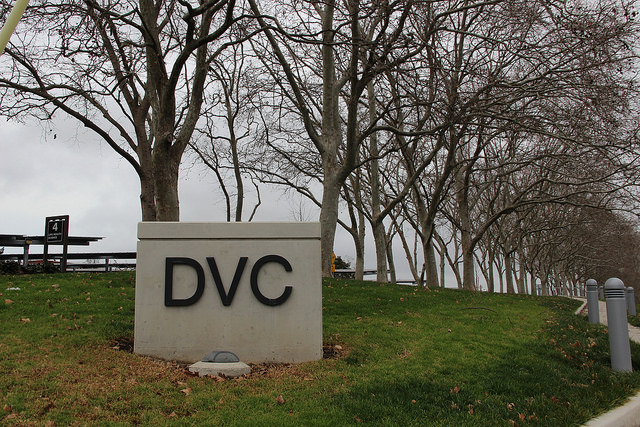 Students response to the third incident of graffiti and more details are released. (Inquirer file photo).

In the wake of racist graffiti found on the Diablo Valley College campus, a list of demands were presented to DVC president Susan Lamb during a walkout on March 13. Several departments and student organizations have expressed their public support of the movement, namely Academic Senate, the Social Sciences Division, and Lamb herself. The list of demands includes requests ranging from mandatory anti-racist training and workshops to hiring more faculty of color and student workers of color.

Members from the Puenta, MESA, and Umoja programs have been leading the movement, driving much of the action taking place around campus, including the call for phase one of the demands themselves.

Mark Akiyama, a faculty member within Social Sciences, sent out an email to the DVC community on March 28 that supported several of the demands, including more transparency, a robust ethnic studies department, and greater support for staff and faculty of color. In the email, he also states how the anti-racist training can specifically be carried out and maintained.

“Anti-racist training for faculty, staff, students, and administrators district-wide. The entire all-college day should be devoted to addressing racism and intersectionality in the classroom and college wide. A student panel should be invited to address the assembled faculty, staff, and administration during the keynote time to share their experiences and perspectives,” Akiyama wrote.

In response to the email, Academic Senate president Beth McBrien released a statement the following day, thanking the social science division for affirming their continued advocacy. The Senate itself added an agenda item titled “Call to Action: A Faculty Conversation to Address Racism Through Advocacy, Action, and Dialogue” for their meeting this past Tuesday, as a part of their own efforts to bring the further dialogue to these issues.

“This conversation is a first step; we look forward to supporting the engagement of faculty, staff, administrators, and students as we all work to create a more safe and inclusive campus community,” stated McBrien. “This will be an on-going Academic Senate conversation and we welcome your participation and input.”

Associated Students of Diablo Valley College also released a letter supporting the student demands last Wednesday, April 10. Dorothy Holmes, ASDVC’s Diversity Affairs Officer who drafted the letter stated that “ASDVC’s purpose is not only to act as the voice of the student body but also to amplify the voices of those groups who are being silenced. It is for this reason that ASDVC stands in solidarity with the Black Student Body and its allies against systematic racism and racialism.” 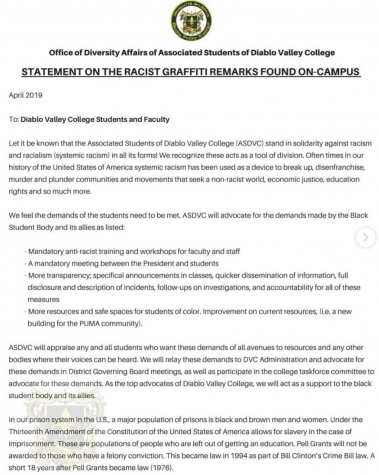 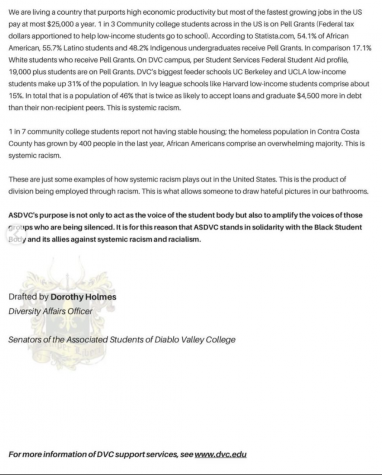 This past Wednesday, on April 10, Lamb sent out an email updating faculty and staff of ongoing efforts regarding implementation of changes desired by students. Among her listed efforts is the creation of a task force composed of classified personnel, faculty, and students. The intention was to provide recommendations to the College Council, intent to move forward with “professional development for all managers, classified, and faculty around anti-racism, cultural competency, unconscious bias, and the professional development tools necessary to discuss racism, Islamophobia, homophobia, and other forms of hate speech”. In addition, counter-messages in the form of posters throughout the campus and as computer screensavers were proposed. Lamb also stated to be working with the Academic Senate and Classified Senate on implementing an all-college day, with a focus on “Anti-Racism and Creating Inclusive Environments,” an idea that was first mentioned by Akiyama.

Lamb emphasized the fact that she is only one person, and is seeking a combined effort of all faculty and staff at DVC in applying these changes and making sure students feel welcome on campus.

“For us, as a college, to act on our values of creating a more inclusive environment, each of us needs to take responsibility to move into these uncomfortable spaces and participate in these conversations,” stated Lamb, “to attend professional development and expand our skills in discussing these topics; and to support each other in creating a more inclusive environment where all our students and employees feel safe, seen, respected and valued.”