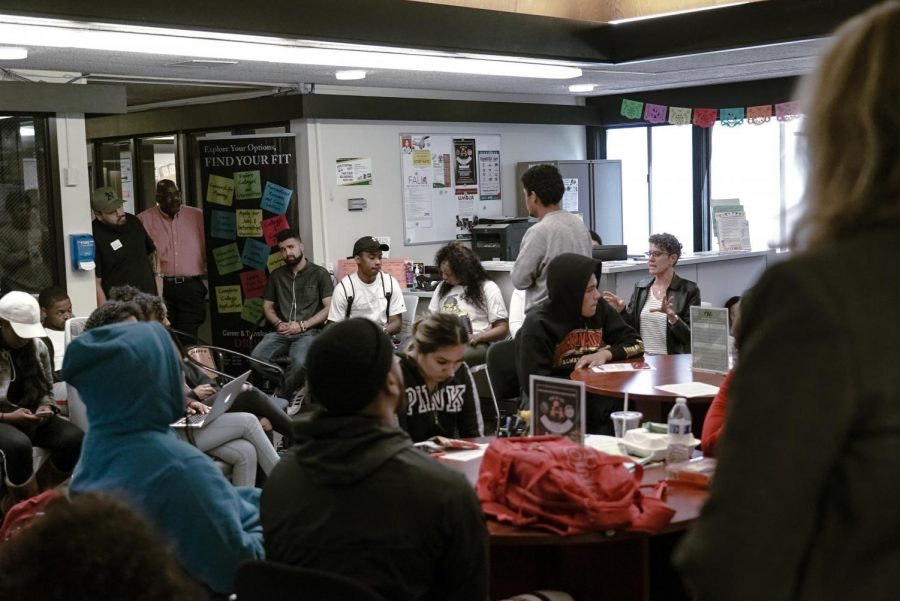 Students and faculty meet in the PUMA Center to address recent racist graffiti.

Another incident of racist graffiti has prompted students and faculty to confront issues of racism at Diablo Valley College, and the fight against it.

On Oct.9, DVC President Susan Lamb sent out an email informing students that the “N word” was found in the Advanced Technology Center on a men’s restroom wall. Hours later, Lamb met with students in the PUMA Center, a building that primarily focuses on academic programs for students of color.

“The question I always ask is, how do we strengthen ourselves together to be resilient?” said Lamb, President of Diablo Valley College during the meeting.

Causality for the incident has only been speculative. Suggestions have spanned from somebody wanting attention, to a correlation between exams and other high-stress times during the semester leading to open displays of hate. Despite the previous culprit admitting to the former, some details about the incident are still unknown. The meeting that has prompted students and faculty to take further action was held at the Pleasant Hill campus’ PUMA Center.

During the meeting was filled with students seeking action. About 25 students and a handful of faculty members attended the meeting. Many students expressed feelings of negativity that goes beyond any single instance of racist graffiti and racism altogether at DVC. By a show of hands, a vote was taken during the meeting to see if any students had never experienced racism. Not a single member raised their hand.

Some attendees suggested monitoring the restrooms to prevent further incidents. Another proposed posting positive messages on the walls of locations where previous graffiti was found.

Moving forward, the PAU will start working with a new campaign that will reflect DVC’s values of inclusivity and diversity. During the meeting, all agreed that the individuals responsible for the graffiti make students of color to feel unwanted on campus. Many agreed that if somebody was willing to place hate on a wall, the consequences should be clear and any progress in preventing this problem must have transparency.

“We’re looking at developing a communications and messaging campaign that’s more reflective of what DVC stands for and hopefully puts out a positive message,” said Rosa Armendariz, who serves as the Office of Student Engagement and Equity in addition to working directly with the PUMA Center.

According to Armendariz, the campaign will be making posters, starting a social media platform and create broad communication on campus. The issue has also become a safety concern, in response, the campaign seeks to spread more awareness for semesters to come.

To keep up momentum, the Task Force will also be merging with current college committees such as Student Equity and Success as well as the Communications Committee, according to Lamb’s faculty-wide email sent out at the beginning of the Fall 2019 semester.

A link to the DVC website was also found in the email. It provides further information about the specific facets of the Task Force for anyone on campus who would like to remain informed or get involved as the movement is still ongoing.