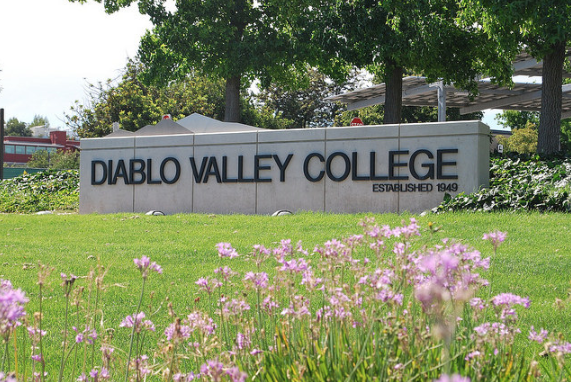 Lindsey Barrows, a 22-year-old part-time student, said she finds the DVC campus more sustainable compared with other schools she has attended. (The Inquirer file photo).

Diablo Valley College is now the fourth top-ranked community college in California and ranks number one statewide in transfers to four-year schools.

That’s according to recent reports by BestColleges.com and the California Post-secondary Educational Commission, which highlighted DVC’s rising academic reputation not only in the Golden State but nationwide.

Other figures recently released by UCLA’s Center for the Study of Community Colleges show that DVC’s transfer rate to four-year universities is 34% percent versus the national average of 20%. The graduation rate of all transfer students nationally is about 60%, while DVC’s rate is 66%.

In an interview with The Inquirer, DVC President Susan Lamb discussed a recent award issued to DVC by College Opportunity, a non-profit that works to enhance quality of education in California. The award recognized the college as a “2019 Champion of Higher Education for exemplary work in implementing the Associate Degree for Transfer (ADT).”

“This award demonstrates our commitment to excellence and the team’s hard work” in educating our youth, said President Lamb.

She explained that DVC works together with University of California and California State University to develop curricula. The cooperation assures UC/CSU admissions officers that the transfer students coming in have received a similar education and are able to move up to the next level of advanced courses.

Many UC/CSU schools offer automatic admission for DVC students upon completion of a two-year Associate Degree of Transfer, or 60 units of credit in predesignated courses with a specified GPA.

Lamb attributed several factors to DVC’s rise in rankings among community colleges. For one, administrators realized that the school—which offers a total of 487 courses, higher than most California community colleges—needed to present more focused programs to make it stand out from the college pack. As a result, in recent years DVC has been catering more to what students want to study, from liberal arts, science and math to courses ranging from cooking, drama, filmmaking, astronomy, languages and music.

In addition, DVC has offered a range of other “in demand” courses based on current corporate and market trends for job seekers, showing that the school is listening to California’s large and diverse business community.

Second, Lamb said DVC has tried to recruit more students both from in and out of state, including foreign students. Having more students absorbs overhead and helps DVC streamline its efforts in improving the quality of teaching and lab equipment, and hiring more teachers.

Third, despite the quality of teaching being excellent, DVC recognized that teacher salaries must be raised to keep up with competition. A recent State of California survey found that 60% of education administrators have been in their jobs less than four years, and only 13% more than 10 years. A majority said they anticipated staying no more than three additional years at their current school, and nearly a quarter expected to last less than a year.

President Lamb, who has been in her position at DVC for more than three years, said she is in dialogue with the school’s Board of Directors and other agencies to discuss how to address attrition rates in California’s hyper competitive teaching environment.

As DVC expands its course offerings, recruits more students, updates its curriculum to meet changing UC and CSU requirements, and reduces teacher and administrator attrition rates, the school may have a brighter future yet.