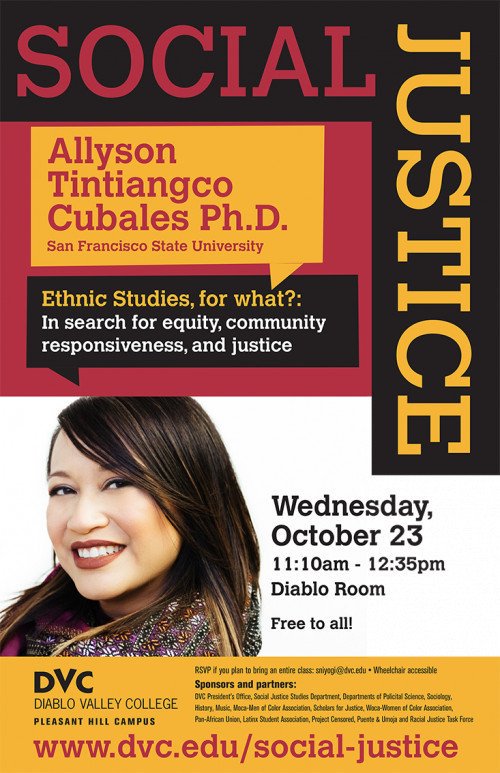 “Ethnic studies is not colorblind nor is it a very watered down multiculturalism,” Tintiangco-Cubales told an audience at the Oct. 23 Equity Speaker Series gathering. “It’s much more critical than that. It is about centering the idea of race so we can eliminate racism.”

Tintiangco-Cubales’s lecture, entitled, “Ethnic Studies for what?”, came one month after the latest act of racist vandalism was discovered on DVC’s Pleasant Hill campus, where the n-word appeared in the men’s bathrooms of the Advanced Technology Center building. A series of similar racist incidents occurred in the spring semester, resulting in a student-organized rally where students first made the demand to establish an ethnic studies program at the school.

Tintiangco-Cubales described the racist graffiti events as both “scary” and “heartbreaking,” but encouraged students and faculty to use them as an opportunity to make real change.

“Instead of being so scared of it, it’s important to take it on and see who else cares,” she said.

Developing an ethnic studies program would send an important message at this time especially, she added because it would let the culprits know that “what they’re thinking is really not what everyone thinks.”

Tintiangco-Cubales emphasized the need for DVC to work with other institutions in its quest to develop a comprehensive program highlighting ethnic studies.

“DVC should not work in isolation. There is a national movement on ethnic studies and that should be connected,” she said.

She also made the argument that the program didn’t just represent a degree, but would offer students a worldview that fostered a strong commitment to social justice.

“We are not just going to get educated in the classroom,” Tintiangco-Cubales said. “We are going to bring it back to our communities and make social change.”

As an expert in Ethnic Studies, Tintiangco-Cubales supports the implementation of an Ethnic Studies program at the college, believing it is essential to student performance.

According to Tintiangco-Cubales, studies conducted by Stanford University show that student attendance improved by 21% and grade point averages jumped 1.4 points at schools that implemented an ethnic studies program.

Another set of data also showed that “ethnic studies is impacting mental wellness,” Tintiangco-Cubales reported, emphasizing that this improvement is just as important as students’ improvement in academic performance.

Tintiangco-Cubales stated that an education in ethnic studies provides students with the tools to challenge dominant ideologies “that have made brown and black people feel like they’re not worthy.”

“We are worthy and our education must reflect that,” she said.