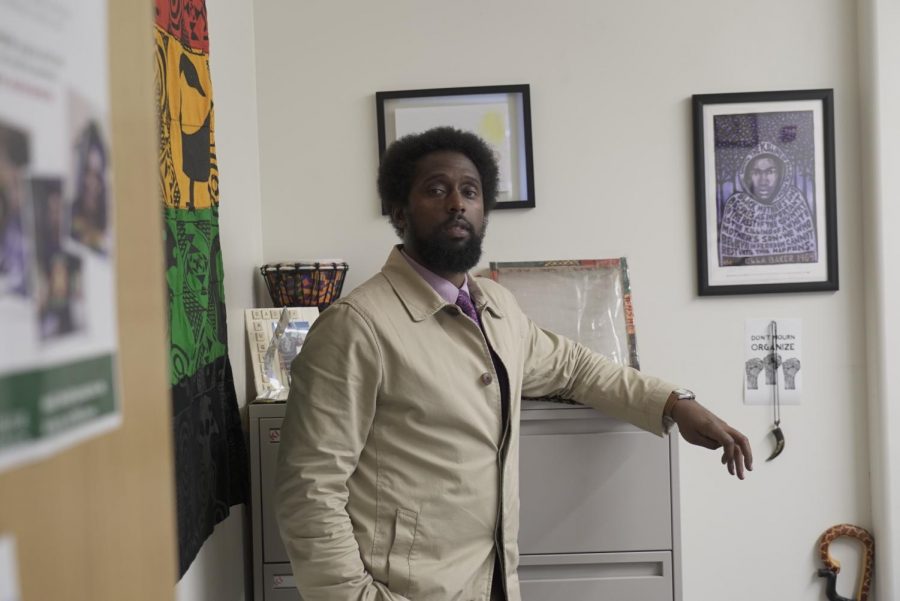 When you enter Eric Handy’s office, the first thing you see is a framed, haunting illustration of Trayvon Martin, the black teen shot and killed in Florida in 2012, intertwined with a poem celebrating the Black Lives Matter movement. To the right are Oakland A’s and Raiders paraphernalia, and scattered around his office are African artifacts, from a drum to a tapestry, revealing a man with local roots and global sensibility.

For the professor and counselor Handy, life at Diablo Valley College is not just about teaching in the classroom. It’s about helping young black students discover who they are – and who they want to become.

In 2019, Eric Handy – who earned the nickname Brother Eric because so many people view him as a family member – took six DVC students from the Umoja program to Ghana. It marked the 400th anniversary since the first slave ships left Africa for the United States, known as the Year of the Return. The group’s goal was to build leadership skills through mentoring, community service, and studying cultural differences, but also to develop individuals’ own identities and sense of purpose.

Brother Eric has been a counselor at DVC and the Umoja and African American leadership program director since 2017. He is also a visiting assistant counseling professor at Saint Mary’s College and a doctoral student in education at Mills College.

He has helped steer many students toward their goals in both life and academics. DVC football player Shakiem Woods has been going to see Eric for counseling regularly.

“Since I came here, he’s been a guide,” said Woods. “He’ll always check up on you, and make sure you’re good.”

For Brother Eric, who experienced his own challenging search for identity, he relates closely to his students.

“Black men have a hard time finding other black men they can connect with,” said Brother Eric. “I understand my purpose in life is to help give direction and motivation for that student that I was when I was a student: looking for some motivation, looking for some hope, trying to figure out (if I could) get through.”

Finding his own path

Brother Eric had a difficult upbringing. Born from a young mother, he and his brother had to take care of themselves growing up and were at times homeless, left to fend for themselves.

“My mother was still developing on her own and so she didn’t take care of my brother and (me) a lot,” he said. The brothers had different fathers, neither of whom were present in their lives.

His aunt took him in, though she already had four kids of her own. Through middle and high school, Brother Eric remembers himself as a “troubled youth.” But his junior year, he suffered from even greater instability.

“I started having drug abuse and hanging around with the wrong people,” he said. “It was a lot of emotional trauma.”

He was struggling in school, but that changed in 1996 when his older cousin introduced him to the summer Accounting Career Awareness Program. ACAP aims to place high school students from underrepresented populations at college campuses, recruiting students of color into the business and accounting fields. He stayed at a college campus during the summer but didn’t realize the value of the program at the time.

Brother Eric graduated from high school in 1998 and went to Morris Brown College, a historically black liberal arts college in Atlanta, for three years. However, in his third year, the college lost its accreditation and he was forced to return to California.

“I end(ed) up coming back to California on a greyhound bus with zero college credits, sleeping on my mother’s couch at the age of 21, so it was a very kind of traumatic time,” he said.

Soon after, in 2001, his cousin called and asked him to fill in for one of the counselors at the ACAP program. Eric accepted, fell in love with the position, and never wanted to leave.

Brother Eric later attended San Francisco State and obtained a bachelor’s degree in communications. While working as a counselor, he joined Saint Mary’s Masters program in counseling psychology. He also worked at Oakland Freedom Schools and was an Ella Baker trainer at Children’s Defense Fund.

He still credits his cousin as one of the biggest influences helping reshape his life.

“If it wasn’t for my cousin putting me in (the ACAP) program back in high school, I wouldn’t have had the (experience) and I wouldn’t have been exposed to all these different people,” he said.

Eric’s favorite part about being a counselor is the time spent in the classroom, constantly interacting with students.

“Even on the worst day, being in a classroom is the best thing that happened to me in life,” said Brother Eric, who sees his role as motivating students to strive for their dreams and give back to the community – something he wished he received in his own youth.

“My goal is to help students find their divine purpose, their passion, and then pursue it in a profitable fashion,” he said. “If you do that, you never work a day in your life.”