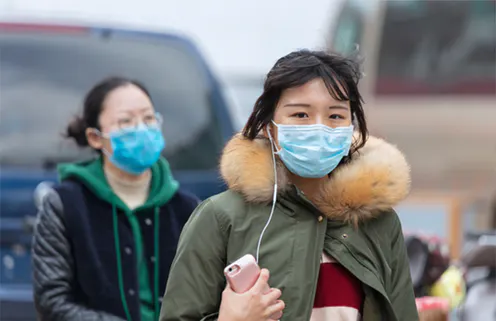 Coronavirus creates many extra challenges for international students at DVC and across the U.S. (Photo courtesy of The Conversation)

The outbreak and spread of the coronavirus from Wuhan, China, has provoked a global range of reactions, from fear to panic. Now, add racism to the list.

As the virus continues to claim lives – more than 1,300 people had died as of Thursday, with more than 60,000 infected – Chinese migrants and people of Asian descent have meanwhile noted an increase in racist attacks online, both in the wider Bay Area and on the Diablo Valley College campus itself.

“It’s just sad to see how most people haven’t noticed the racism that is going on” through memes posted to platforms like TikTok, Instagram and Twitter, said a DVC student who preferred to remain anonymous.

“Everyone is in fear and focused on what can happen to them, and not what is happening around them.”

In recent weeks, as more illnesses from the virus have been reported in the U.S., growing numbers of people have turned to social media to share false information and spread xenophobic messages that reflect their fear or dislike of China, Chinese people, their language or their culture.

On Twitter, people suggested changing the coronavirus name to “Kung Flu.” Some Tik Tok users have been using their platform to make so-called “funny” videos of people spraying Febreze on any sick Asian they see.

In a recent San Francisco Chronicle article about Bay Area acts of racism directed toward Asian people, the paper reported: “Lilian Wang returned from a bachelorette trip this week and encountered a Lyft driver at San Francisco International Airport who refused to unlock the door until her white friend, who ordered the ride, approached.”

The story went on, “The driver then confronted them: Was Wang the same person with a Chinese name he had just canceled a ride for? Were they sure they hadn’t come from China? The driver told them that someone – it was unclear who – advised him to refuse rides from passengers with Asian-sounding names, said Wang, 31, a San Franciscan of Chinese and Taiwanese descent.”

The social media attacks have offended many in the Asian community and provoked some people, like attorney Lou Yang, to try to combat the wave of anti-Chinese rhetoric. Yang recently sent a #I’mNotaVirus meme to Spain in an attempt to correct misinformation about the virus.

The Contra Costa Community College District has taken actions to keep students safe from the virus, sending warnings and educational emails encouraging people to “wash their hands with soap and water for at least 20 seconds, [and] avoid touching your eyes, nose, and mouth with unwashed hands.”