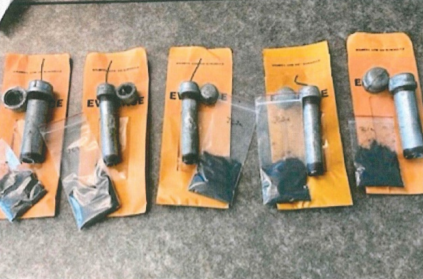 Photo of the 5 pipe bombs, the FBI seized from Ian Rogers found on page 7 of Rogers' criminal complaint

On Jan. 6, 2021, as a mob stormed the U.S. Capitol in Washington, D.C., Robert Lemke was busy storming his cellphone keyboard.

“Your words have consequences. Stop telling lies; Biden did not win, he will not be president,” Lemke texted to the brother of a New York congressman. He continued, “We are not white supremacists. Most of us are active/retired law enforcement or military. You are putting your family at risk. We have armed members near your home… Don’t risk their safety with your words and lies.”

Those are among several threatening text messages that Lemke, a 35-year-old man from the East Bay city of Bay Point, sent on Jan. 6, according to a complaint filed by the U.S. Department of Justice. The complaint also noted that Lemke sent similar ominous messages to a journalist’s family member living in New York.

On his Facebook page, Lemke had claimed to be both a former U.S. Air Force captain and Alameda County Sheriff’s deputy. The Air Force Times later reported his claims of military and law enforcement service were both false.

FBI agents arrested Lemke at his home in Bay Point on Jan. 26 and charged him with one count of threatening interstate communications. If convicted, he faces up to five years in prison.

Lemke became the third and most recent San Francisco Bay Area resident arrested and charged in the aftermath of the Capitol insurrection that killed five people, including a Capitol Police officer. The arrests underscore the fact that the Bay Area—considered one of the most liberal regions in the state, and the country—is not immune to growing threats posed by right-wing extremists.

The day after Lemke’s arrest, the Department of Homeland Security released a bulletin that warned of heightened threats from Domestic Violent Extremists (DVEs) in the period between Inauguration Day and April 30. The FBI defines violent extremism as “encouraging, condoning, justifying, or supporting the commission of a violent act to achieve political, ideological, religious, social, or economic goals.”

Examples of federally monitored DVE groups span the political spectrum, including white supremacists and militia members on the far right, as well as anarchists, animal rights and environmental activists on the left.

The bulletin warned that “some ideologically-motivated violent extremists with objections to the exercise of governmental authority and the presidential transition, as well as other perceived grievances fueled by false narratives, could continue to mobilize to incite or commit violence,” in reference to former President Donald Trump’s untrue claims that the 2020 election was rigged.

The report concluded that moving forward, violent extremists “may be emboldened by the January 6 breach of the U.S. Capitol Building to target elected officials and government facilities.”

On Jan. 15, FBI agents and the Napa County Sheriff’s Department arrested Ian Rogers, 43, at the auto body shop that he owns in Napa, Calif. After searching Rogers’s home and business, law enforcement reported seizing 49 firearms, thousands of rounds of ammunition, five homemade pipe bombs, and copies of The Anarchist Cookbook and U.S. Army Guerrilla Warfare Handbook—manuals which could aid in the construction of improvised explosive devices and the execution of a broader insurgency.

In text messages discovered on his phone, Rogers had discussed his desire to attack Democrats and other elected officials, writing phrases that included: “I want to blow up a democrat building bad”; “I hope 45 [President Trump] goes to war if he doesn’t I will”; and “I’m thinking sac office first target … then maybe bird and face offices.”

The complaint filed against Rogers by the Department of Justice noted that “sac” likely referred to the State Capitol in Sacramento, while “bird” and “face” referred to the headquarters of Twitter and Facebook. If convicted, Rogers faces up to 10 years in prison.

Also on Jan. 15, a DOJ complaint filed against Daniel Goodwyn, 32, of San Francisco, alleged that Goodwyn had physically taken part in the storming of the Capitol. The complaint noted that Goodwyn is a member of the Proud Boys, a right-wing extremist group recently classified as a terrorist organization by the Canadian government. Law enforcement arrested Goodwyn in Corinth, Texas, on Jan. 29.

The Inquirer reached out to numerous local police departments to get their assessment of local security threats posed by members of these and other violent extremist groups. According to various police departments across the East Bay, no threats appeared imminent.

A spokesperson for the Concord Police Department said, “We keep abreast on all local, regional and national trends, both outside and inside Concord, and we keep up to date with any information regarding any kind of extremism.”

Similarly, the public information officer for the Benicia Police Department stated, “We are always in tune with what’s going on regionally, as well as nationally, and will prepare ourselves accordingly to any possible threats.”

She added, “On Inauguration Day we had additional staff patrolling the city, with dedicated officers partnering with the California State Parks to protect the former Capitol building here in Benicia.”

According to a spokesperson for the Pleasant Hill Police Department, no credible information about national security threats had been received. The Contra Costa Sheriff’s Office declined to comment.

The FBI, on its website, announced that it is “seeking the public’s assistance in identifying individuals who made unlawful entry into the U.S. Capitol building on Jan. 6, 2021. You can call 1-800-CALL-FBI (1-800-225-5324) to verbally report tips and/or information related to this investigation, or submit a tip online at tips.fbi.gov.”

The site also stated, “You may know someone in this country who has radical beliefs or agrees with the actions or ideologies of violent extremist groups. That is their right under the U.S. Constitution.

“However, if a person seriously plans to carry out an act of violence or is strongly pushing you or someone else to do so, that is illegal.”