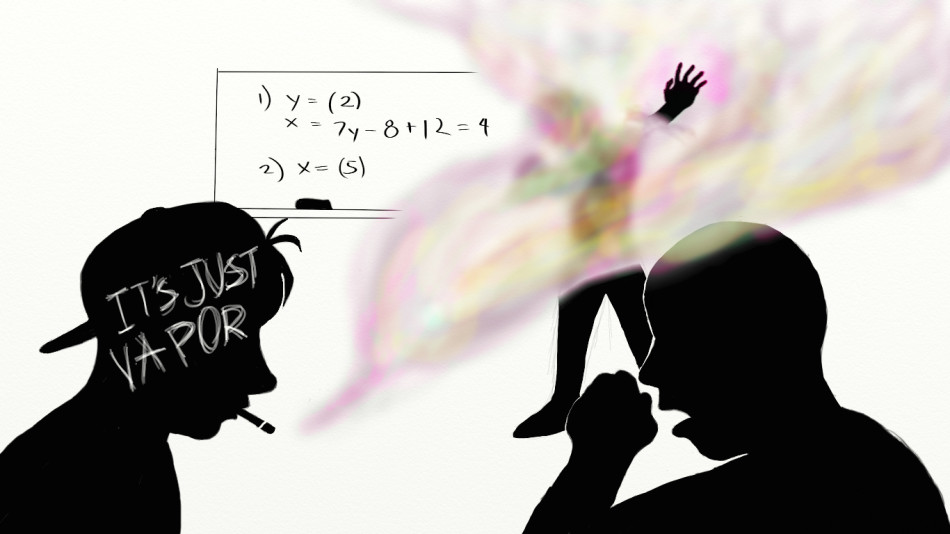 It was only a few years ago that electronic cigarettes were being marketed as the ‘cigarette of the future.’ It was easy to ignore this as an exaggerated marketing scheme, however, today these ‘e-cigs’ have exploded in popularity over the last 18 months. Students can be found puffing away right outside of class and some of the more brash students have been seen puffing inside of class during instruction.

The future of smoking is here, and DVC’s existing smoking policy does not address this new trend. The school administration has taken notice, but has not made any attempt to implement a restriction on this behavior.

E-cigs have grown so fast in popularity that there are few reliable sources that give an accurate estimate of how many Americans are using them.

According to an article written by Forbes on Sept. 17, 2013, in this past year, e-cig sales surpassed $1 billion, and continues to grow. Their popularity has been taken upon by young adults, such as DVC’s student body.

Teachers reporting students vaping in class, but they lack the authority to enforce such rules on their own. Some have opted to ban their use by explicitly forbidding them on the class syllabus along with eating, drinking and texting.

Their pleas to the school administration and even police services has fallen on deaf ears and there is no major effort by either department to enforce school policy, let alone California law.

DVC’s lack on enforcement across campus is evident in the number of students that smoke outside of designated areas. While most only smoke near the entrances and exits to the parking lot, there are sightings of students lighting up as soon as they get out of class.

The banning of e-cig remains controversial and advocates against the ban include respected publications such as The Economist. An article written March 23, 2013, suggests that vaporizers should bypass the smoking restrictions because using the device does not actually produce any smoke, only water vapor.

However, the use of vaporizers in a classroom is inherently disrespectful to the instructor and the other students. The vapor that is produced creates a distracting cloud and a smell that not everyone finds appealing. Class time should not be used by students to feed their addictions.

DVC should have more incentive to enforce a ban on e-cigarettes in class because of how distracting it is. However, with accreditation looming, DVC’s highest governance committee, College Council, has decided to hold off on any more talks of updating their smoking policy until this upcoming fall semester.

DVC suffers from a problem of enforcement. Even the existing smoking policies are not being enforced by the school administration or the police. While most students that smoke could be found near the entrances of the parking lot, a noticeable amount are smoking almost anywhere they please.

In the past years, DVC has attempted to enforce a smoking ban to include exponential fines. These extreme measures were never written into the policy, but with the continual lack of enforcement

DVC is a public institution that is obligated to maintain a learning environment that allows students to function with minimal distractions, and that alone should be incentive enough to modernize its smoking policy.