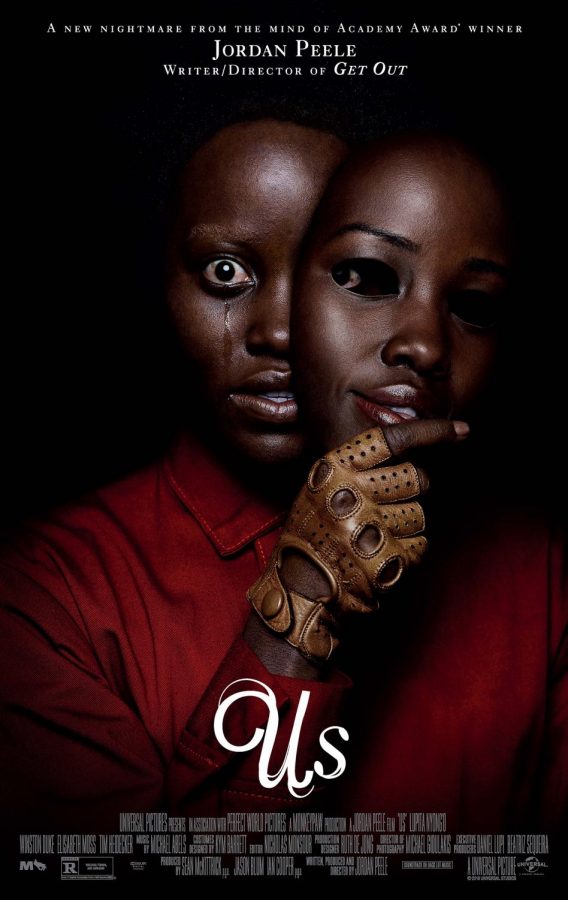 The movie poster for "Us," written and directed by Jordan Peele. (Photo courtesy of IMDb).

The revolution of 80’s horror-nostalgia in film, ushered a new form of social commentary that pays homage to its predecessors.

Jordan Peele’s “Us,” killed on opening-weekend. With a domestic total provided by Box Office Mojo of $70 million on a $20 million budget. The film is a perfect example of  plot devices based on psychological relics, which is why Peele caught everyone’s attention. That, and his long-standing history on Comedy Central. After the 2018 Oscar win for Best Original Screenplay in Jordan Peele’s “Get Out,” his follow up still holds true to the high-concept style he began with. “Us,” can technically be categorized as horror, but it pushes the boundaries of surrealism even farther than usual for the genre.

Peele knows how to transcend normal horror elements; where prototypical characters written by another filmmaker in the genre might come off as shallow, unlikable, or just plain cannon fodder for the antagonist, Peele’s characters feel like an extension of reality — almost like a portal through the anti-matter of society.

The producer of “Us,” Jason Blum of Blumhouse has historically had a problem with fruitless death in his films – shown in the other Blumhouse productions like, “Paranormal Activity,” which has an array of clanging pans, “The Purge,” being designed to simply show how terrible people can be, and “The Lazarus Affect,” containing a protagonist who is so unredeemable, they become a demon. Peele avoids these usual tropes, while still using the financial support of Blumhouse and Universal Studios.

As sole writer and director of “Us,” he induced so much empathy for his protagonists, that most of their decisions were believable — despite the real madness of what was happening. It begins as a standard home-invasion but as it progresses, the lines of morality and genre are blurred. At one point, I thought I was watching a slasher and the next, I was reminded that it could end up being apocalyptic. To show the level of craft, there’s this opening shot zooming out from a close up of bunnies. The music in that scene by Michael Abels, who began his Hollywood career doing the music for “Get Out” and “Detroit,” reminded me so much of “The Omen’s,” prelude from 1976, that it gave a spine chillingly spiritual sound I still have stuck in my head.

“Us,” stars Lupita Nyong’o, who rose to become one of the most prominent actresses in the industry after her performance in “12 Years a Slave.” Her iconic portrayal as Patsey, a slave caught between a master’s lust and loss of identity won her an Oscar in 2015, for Best Performance by an Actress in a Supporting Role.

There’s this moment in “Us,” when she’s standing at the foot of her husband’s bed. Lupita’s character Adelaide Wilson, sensed a threat and can’t explain it. At first glance, it just feels like a mother with instincts but on the second, it’s extrasensory perception — this begins the ultimate reveal of Adelaide; every decision past this point shows pieces of her backstory. Gabe, a father with timeless jokes played by Winston Duke, who’s also M’Baku in “Black Panther,” accompanies Adelaide to ground the film’s experimentation.

The first conceptual element to note relates to “Us,” unequivocally paying homage to, “Invasion of the Body Snatchers,” which is a classic science fiction horror picture from 1978, set in San Francisco. The film is written by W.D. Richter and directed by Philip Kaufman, who also wrote “Indiana Jones: Raiders of the Lost Ark.” The overarching theme of duality is conveyed by humans fighting against naturally made clones – but by naturally-made, I literally mean, they’re birthed through a plant-like organism. The moral question of killing your own clone remains.

Just as “Us,” manages to convey duality, Peele still resists the temptation of telling the audience where his clones actually come from — despite the initial title cards explaining that thousands of miles of abandoned tunnels exist beneath US cities. Which ends up being the doppelgängers home, begging the viewer to question government interference. The second aspect, is a stylistic throwback to some degree. Peele’s script utilized revelations to expand the plot.

We begin with a singular incident, being the strange doppelgängers attacking one family. The story itself expands as it goes on. Soon, the whole town has an evil clone. It even finishes with the possibility that the entire earth could be killed by their copy. “Invasion of the Bodysnatchers,” is written in a similar way. It’s first believed that the plantlike people may only be a small group, but it spreads across the entire world. It’s as if the plot itself is growing as it progresses.

That’s where the literal similarities end, because the Bodysnatchers have a relatively clear motive, which is to expand. Whereas, every Doppelgänger except for Adelaide’s, has a thin objective — kill their copy to become what they call, untethered. In “Us,” which had a good portion of the footage shot in Santa Cruz ironically enough, the immediate threat is shown in a flashback to young Adelaide, wandering off to find her clone in some “Big-type-Zoltar,” nod — in the use of mysteriously creepy carnival attractions.

The Star Wars franchise truly missed an opportunity by pinging Lupita to the forgettable cgi-role of Maz Kanata. Nonetheless, Adelaide’s children Jason and Zora played by Evan Alex and Shahadi Wright Joseph, are competent for child actors — paying service to the plot through mixing moments of horrific violence with levity.

Some reviewers claim the main idea of the film harks back to the, “You are your worse enemy idea.” A couple movie posters even have it in writing. This film goes beyond that. Just as “Get Out,” was an example of W.E.B Du Bois’ theory of the double consciousness, “Us,” explores another psychological concept that deals with the denial of our shadowed selves. It’s the personification of Carl Jung’s study on archetypes. The doppelgängers in “Us,” represent Jung’s theory of the shadow, by each character denying the existence of that evil-self.

In life, some refuse their inner darkness to the point of destroying a piece of humanity within. Is it right to kill our darker self? Peele was asked why he uses horror as a vessel for addressing these heavy concepts, in an ABC Night Line interview.

“I love horror because it gives a visceral reaction,” said Peele. “It gets an audible reaction and it makes you feel first. Art that makes you feel, ends up making you think.”