Resist and Revolt: What students today can learn from Berkeley’s Free Speech Movement 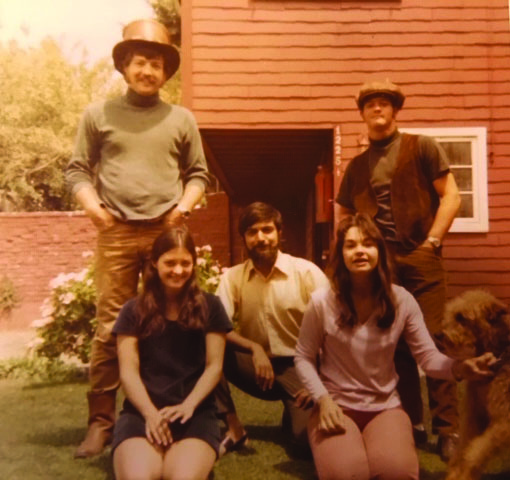 Prabhat Jain and his peers at UC Berkeley during the Free Speech Movement in 1964. (Photo courtesy of Prabhat Jain).

“Listen up everybody! All foreign studen­ts, people who are not registered at the University, seniors and disabled people all need to leave right now. If you do not leave, you will be arrested and many of you will be shipped to the country where you came from and others thrown into jail for trespassing on private property,” Mario Savio, leader of the Free Speech Movement, screamed into the loudspeakers.

It was Fall 1964 in Berkeley, Calif., and I was a junior in the Electrical and Bio-Electronics Engineering department. The spontaneous wave of anger that began that fall in small student political groups had spread like wildfire, shaking the nation and most major campuses across the United States. Berkeley became ground zero for the burgeoning Free Speech Movement, creating a campus legacy of dissent that continues today—visible most recently in protests over far-right speakers Ann Coulter and Milo Yiannopoulos.

The Founding Fathers were far-sighted when they created the First Amendment of the Constitution guaranteeing the right to free assembly and speech. 55 years ago, the Free Speech Movement relied on this fundamental right as the basis for its political activities. The FSM used nonviolent tactics learned from students who had traveled to the Deep South to help African Americans. It also marked the beginnings of the New Left, embodied by young activists who felt that society and democracy had been compromised by America’s fear of communism and the Civil Rights movement.

In opening up the right to free speech and political activity on Berkeley’s campus, students showed the far-reaching influence of the Civil Rights movement, outside of the South. Their activism would pave the way for future students in California who would focus on the Vietnam War and attaining political and economic power for people of color.

The bigger difference between then and now is that in today’s climate, not so many young people are willing to put their bodies—or for that matter, their beliefs—on the line for the sake of social and political change.

The Iraq war that began in 2003 serves as a stark reminder why students need to learn to organize themselves again, like they did in the Vietnam protests of the 1960s, to prevent further senseless power plays by irresponsible politicians. Now, the withdrawal by our current administration from the landmark Paris Climate Treaty stands in total disregard to potential cataclysmic events. The climate crisis calls for students once again to rise up, revolt and demand that our leadership stop this destructive, anti-democratic course of action and denial. Students today can learn from the FSM, the creation of People’s Park and anti-Vietnam war protests to bring about needed change.

In Fall 1964, Berkeley’s students decided they had had enough of the school’s restrictive policies. Campus administration had decided the Bancroft strip of Telegraph Avenue, just outside Berkeley’s Sather Gate, was off limits for handing out pamphlets and petitions, and it barred student efforts to recruit new members to the movement. Students had recently protested local businesses that discriminated against African Americans and Native Americans, and the conservative UC Regents – composed largely of corporate chief executives and Republican leaders – were pressing the school to close the campus and adjacent areas to prevent further agitation.

Students responded emotionally to the intimidation. I remember watching Civil Rights activists and ordinary students—even some conservative ones—protest the shutdown of left-wing pamphlet distribution. On Sept. 29, students set up tables on the Bancroft strip and refused an order to leave. When five protesters were told to appear in court, which was tantamount to an arrest warrant, 500 students, led by Savio, marched on the administration building. The marchers demanded that they, too, be punished in solidarity. After that, the movement lost momentum, but an offensive letter drafted by UC Regent lawyers and sent to FSM leadership, forbidding them from setting up tables on Bancroft, got the movement moving again.

The FSM told students to bring their sleeping bags to a Wednesday noon rally on Dec. 2. After famed folk singer Joan Baez electrified the crowd with “We Shall Overcome,” about 2,000 people again occupied the administration building. In the middle of the night, Governor Pat Brown told police to clear the building. Arrests started at 3 a.m. and took 12 hours. I watched the arrests in horror, along with my girlfriend, outside the building. After all, my own grandfather spent a year in jail in the Quit India movement to throw the British out of India. I was not going to be intimidated. I recalled the words of FSM leader Savio:

While the building was still being cleared, a student strike began. Faculty raised bail money and drove to various detention centers to bring the students home. Multiple meetings were held over the weekend by everyone involved — except the Chancellor, who was hospitalized, presumably from stress or not wanting to deal with us. University President Clark Kerr canceled Monday classes to hold a meeting where a newly formed committee of department chairmen would agree what he hoped were acceptable terms to end the conflict. While offering students amnesty for the violations, they had committed during the prior two months, administrators did not punish them further. The students got what they wanted: free speech and assembly.

“We gave youth in America a sense that political and social action is something that you can and should be involved in and you have power,” said Janie Blum, a former Cal student who met with me on campus recently to talk about our shared past. Remembering back, I recalled the time a student dashed into our class in Cory Hall shouting, “Let’s go, all, let’s go!” The class emptied out and we ran to Sather Gate, the entrance to the university, where thousands of students had gathered and smelled the tear gas. It was exhilarating as tears ran down our faces, no one sure whether it was from the gas or the sadness of seeing cops beat upon our fellow students. I joined the tens of thousands that day and we all pushed together, body to body, feeling the momentum of our youth and energy to change the world.

In those months, the CIA stepped up its recruiting efforts, especially in the College of Engineering’s departments. I was aggressively recruited with threats of being deported if I didn’t join. They had photos of me demonstrating on campus in violation of the rules for foreign student visa holders. I went to our Dean who told me to simply leave if the CIA officer showed up again. He never showed up.

The Free Speech Movement taught us some valuable lessons, namely, that by standing up for your rights, you can have a major impact on the world around you. The FSM not only symbolized the power of student activism, but the influence of the Civil Rights movement on California students. The students that were initially cited and arrested by the school were all members of the Congress of Racial Equality, or CORE, a national Civil Rights organization dedicated to ending racism.

During May 21-23, 1965, the student Vietnam Day Committee organized the largest ever teach-in on campus. The 36-hour event was held on the playing field where Zellerbach Auditorium is now located. Over 30,000 people turned up, from students to ordinary citizens, and participants included Dr. Benjamin Spock; veteran socialist leader Norman Thomas; novelist Norman Mailer; independent journalist I.F. Stone; and philosopher and my personal friend Alan Watts. An empty chair was placed for a representative of State, which read, “Reserved for the State Department.”

Through the rest of the 1960s, large anti-war demonstrations continued in Berkeley. Tear gas came at us weekly. But we kept going. The protests galvanized campuses across the U.S. Students and their parents were demanding explanations for their brothers and sons being killed in Vietnam. My new girlfriend from New York, who was living with me in California, was devastated learning that her 27-year-old brother’s plane had been shot down over Vietnam and he had been killed. She was never the same after the tragedy.

In the spring of 1969, the university began to plan recreational fields in a park located two miles from campus. The idea for an alternative park came from a group of young activists who held an evening meeting and began devising an idealized vision for a public space. Over the next few days, a few hundred park-building volunteers showed up, and their number grew exponentially. Some local activists, among them principals of the 1964 Free Speech Movement five years earlier, envisioned this grassroots effort as creating a place of free speech and community gathering.

Negotiations ensued between Berkeley campus administrators and the park builders, but before their conclusion, Gov. Ronald Reagan, in an attempt to solidify his conservative political base, intervened by sending police to remove landscaping that had already been planted by park proponents, and to fence the park. After a noon rally at Sproul Plaza, students and community members, at the urging of the Associated Students of the University of California (ASUC) president, marched to the site and a riot erupted. Student James Rictor was shot and killed by police, who reported that he was throwing reinforcing bars at them from a rooftop. Alan Blanchard was blinded by police buckshot. On May 30, 1969, a peaceful demonstration of 30,000 people marched through Berkeley, not just to support the park, but also to protest the intervention by, and action of police, most notably the Alameda County Sheriff’s officers. Ultimately the university capitulated on the use of the land and People’s Park was born.

Connecting past and present

Today, King’s words still ring true and hold the power to inspire a new generation to rise up and demand equality, justice and fairness for all. Students in the 1960s understood the stakes and made sacrifices to uphold free speech, end the war in Vietnam, and build a community park whose message continues to resonate more than a half century on. What students choose to do today to challenge the levers of power can mean everything for our future and the future of our planet.