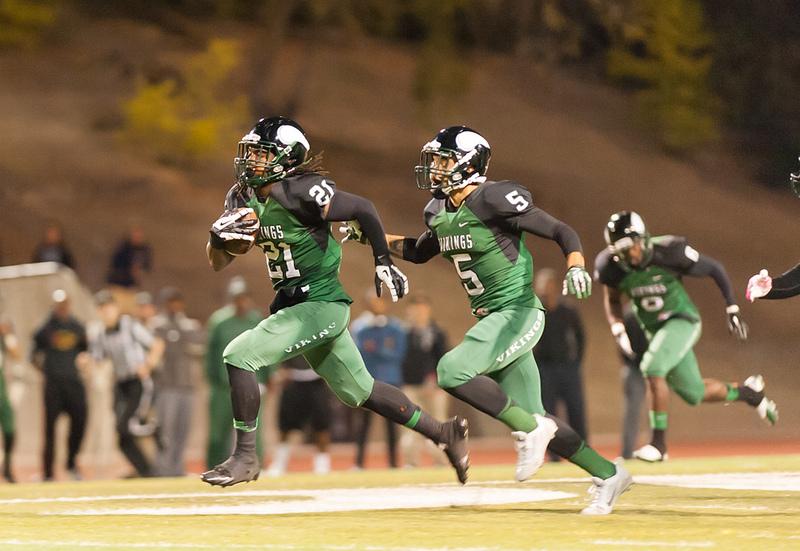 DVC DB Na'im McGee (No. 21) gets an interception in the second quarter against College of San Mateo to score the Vikings' first TD of the game. Pleasant Hill, CA. Sept. 20, 2013. (Andrew Barber/ The Inquirer).

DVC lost to College of San Mateo on Friday, Sept. 20 by a score of 14-7, dropping to 0-3 on the season.One of DVC’s most explosive offensive plays came on their first snap of the game, a 16 yard scramble by quarterback Niko Fortino. Unfortunately for the offense, and Fortino in particular, that would be one of very few highlights.The Vikings’ second drive went three-and-out. Punting from their own end zone, Travis Kummer had his punt blocked. San Mateo recovered the ball in the end zone for a touchdown, giving the Bulldogs a 7-0 lead with 8:20 left in the first quarter.”We need to clean up our special teams. You can never give up a blocked punt,” defensive line coach Vince Bordelon said. Were it not for that breakdown, the scoreboard would have surely remained blank, as the defense forced San Mateo to punt on every one of its possessions, swarming the ball carrier on just about every rush attempt.San Mateo didn’t take long to respond, getting their second score of the game on an eight- yard run by running back George Naufahu less than four minutes after DVC knotted it up.On the ensuing drive, DVC faced a second-and-25 situation. Fortino threw a swing pass to running back Joe Te’o, who sprinted down the left sideline, cut back towards the middle of the field, and was stopped just a yard shy of the first down. Fortino then overthrew his receiver on third-and-1, forcing them to punt once again.As the offense struggled to find a rhythm, the defense continued to establish its dominant form. The defensive line blew up run after run, holding San Mateo to under 30 yards rushing in the first half.”Our job was specifically just to take the fullback. And we did that, the d-line did that,” defensive end Tui Talia said. The Bulldogs took a 14-7 lead into the half.DVC got the ball to start the second half, and they immediately had their best drive of the game. Fortino dropped a perfect throw into the hands of wide receiver Quinton Hill, who laid out for a 36-yard pick up. A holding penalty on San Mateo kept the Vikings marching, but the push eventually stalled without any points to show for it.San Mateo tried to respond, getting an 18-yard reception that put them at the DVC-37. After penalties pushed them back to second-and-31, Talia and cornerback Antoine Albert combined for a sack that took them out of field goal range.A couple possessions later, wide receiver Kyrell Hudson fielded a punt at the San Mateo-46. He dashed right, stuck his cleats in the turf, and took of to his right where his blockers had opened up most of the field. He was pushed out at the San Mateo-9, giving DVC its best scoring opportunity of the game. However, after an in-completion and two sacks, kicker Steven Thayer saw his 30-yard field goal attempt ricochet off the crossbar.The defense continued to go above and beyond. Cornerback Akil Bordelon intercepted an errant overthrow at the San Mateo-42, returning it two yards to the 40. The drive ended quickly on another sack of Fortino.”We’ve lost four (offensive) linemen this year already. And when you don’t have an established offensive line, you struggle,” Bordelon said.The fourth quarter came around, but DVC’s offense still couldn’t muster a legitimate threat. Fortino was sacked several more times and the defense became visibly frustrated, getting called for two unsportsmanlike conduct penalties in the span of two minutes midway through the quarter.”We had some guys make some poor decisions at some bad times. Luckily, defense went back out and stopped them again,” head coach Mike Darr said.Although they were on the field consistently, much more than anyone would have liked, the defense battled to give the offense as many possessions as possible. Finishing what they started, they bottled up all phases of San Mateo’s offense, giving the offense two opportunities in the final 3:55 to tie the game. The night ended in fitting fashion, with Fortino getting sacked deep in Viking territory.Darr knew exactly why his offense struggled so much, elaborating on Bordelon’s assessment. “We’re still struggling with all the offensive linemen that we’ve missed. Against a very good team, you’ve got to have all your weapons or else, things like that happen. When your offensive line is struggling, all your other flaws show up.”Darr drove home how vital reliable protection is. “Whenever someone runs the wrong route, the quarterback makes a bad decision, you turn the ball over, anything like that, it all starts when there are problems up front. That’s the foundation of what you do on offense,” he said.When asked if he took any satisfaction in losing by just one touchdown, Darr was very honest. “I’ve been coaching a long time. We’ve had enough moral victories. Games like that, when you play the way we played on defense, you want to win those games.”However, he did take solace in knowing he has a team that never quits. “What I am proud of is the fact that our guys, no matter what position, are never going to stop playing hard. They’re never going to stop battling.”DVC travels to Hayward to take on Chabot College next Friday, Sept, 27 at 7 p.m. The next home game is Friday, Oct. 4 versus Merced College at 7 p.m.