Vikings fall in their home-opener against College of Marin 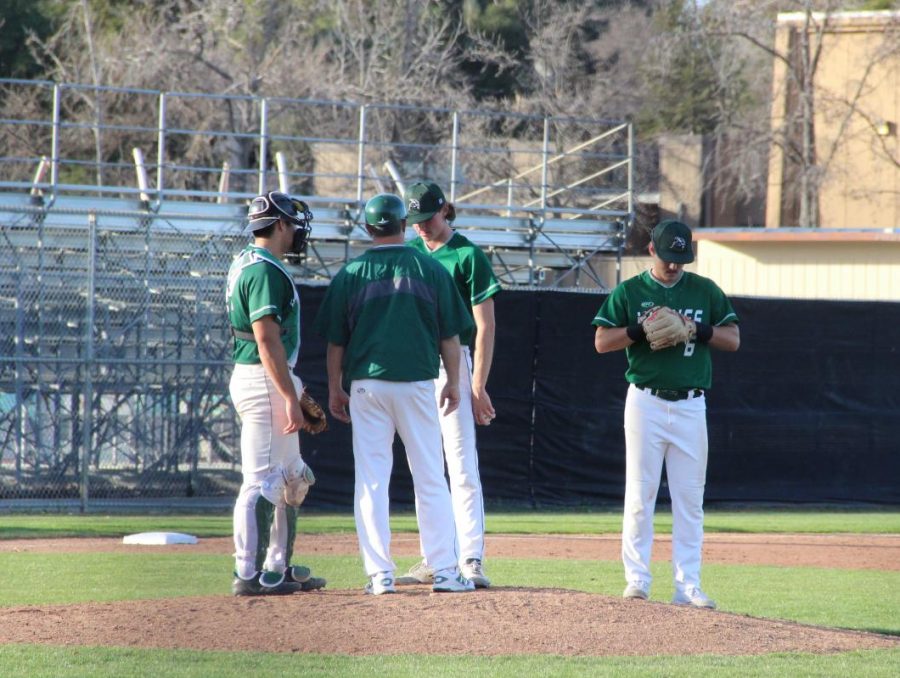 A mound visit occurs after reliever Decklan Cashman gives up a key hit in the eighth inning against College of Marin at Diablo Valley College in Pleasant Hill, California on February 1, 2018.

The College of Marin Mariners spoiled the Vikings’ home-opener with a final score of 5-1 Thursday afternoon.

The game was highlighted by a pitchers’ duel up until the seventh inning. In the eighth and ninth innings, the Mariners scored a combined four runs to pull away with the victory.

“It was 1-1 in the seventh inning, so both teams made a couple good defensive plays on line drives that got caught that stopped the other team from scoring,” said Vikings head coach Steve Ward. “At the end of the day, they got a couple big hits and we didn’t.”

A silver lining in the loss was the outing by starting pitcher Rob Towne. He was dealing on the mound throughout, with seven innings pitched and only one run allowed.

Though the game was constantly close when Towne was out there, the pressure of not having much run support actually brought out the best in him.

“For me, (pressure) just makes it more fun because it’s more competitive, gets the juices flowing a little bit, so if anything, I like it more like that,” said Towne.

However, despite Towne’s outing, a great pitching performance doesn’t mean much if the offense does not get going. The Vikings were only able to muster two hits all afternoon.

“The bottom line is it wouldn’t have made a difference; we have to hit,” said Ward. “We only had two at-bats with runners in scoring position the whole game.”

The Vikings’ aggressiveness at the plate, or lack thereof, hurt their chances at winning this game. As a whole, the team took too many hittable pitches early in the count.

Along with a quiet offensive day, Ward alluded to his bullpen and its inability to get key outs when it was needed most, notably in the eighth and ninth innings.

“We gotta figure out some relief guys that can get guys out,” Ward said.

For the Vikings, their gameplan, for a rematch against the Mariners, will make the necessary adjustments to win this time around.

The Vikings look to avenge their loss against the Mariners in a rematch 1 p.m this Saturday at Sonoma State University.