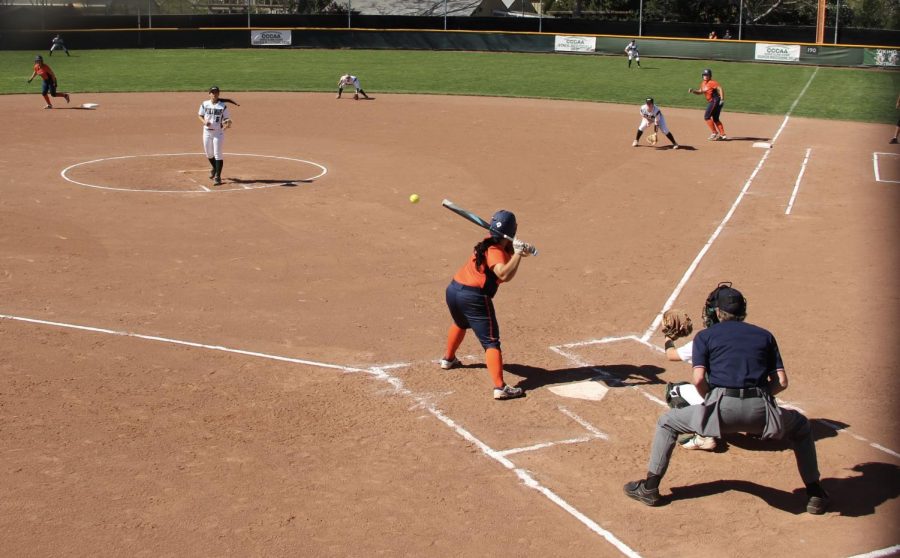 Starting the game was pitcher Mariah Schuchart, who came out pitching for the Vikings. The first two at bats for Cosumnes were a quick two outs with two assists by Schuchart to first baseman Cassin. The Vikings short stop Mari fumbled the ball on defense, giving Cosumnes an easy advance to second base. A deep hit by Cosumnes made it an easy catch for left fielder Avonikah Salas to get the third out.

First up to bat for DVC was Schuchart with a shallow hit to third, getting out at first base. Second basemen Gabriela Arzaga hit to short stop and another out at first. Cassin hit a line drive to centerfield making it to second base. Catcher Hailey O’Rourke was next up to bat with a right field hit, making it to third base and sending Cassin home for the Vikings. Mari hit a ground ball to second base, getting out at first and ending the inning 1-0 for DVC.

“We still have some people playing out of position so it is still a little stressful but we are working hard with what we have,” said O’Rourke.

The next inning saw pitcher Schuchart give up two hits, giving Cosumnes one run in. The Vikings then shut them down on defense with two assists and a caught ball by Mari, cutting Cosumnes at bat short.

In the third inning, Schuchart gave up two hits to start the inning, giving Cosumnes one run and leaving one on base with no outs. Mari caught a hit at short stop giving Cosumnes their first out. Cosumnes got two more runs in and Mari got the next two outs with an assist to first and a catch.

“We need to come out stronger. We started waking up at the end but it was almost too late then. We need to make it easier for ourselves and come out ready,” said Arzaga.

With Schuchart up to bat again the Vikings got their first out with a hit and assist to first. Arzaga got a high hit to centerfield, but got out. Cassin came out swinging with another hit to centerfield, making it to third base. O’Rourke hit shallow to right field, ending the inning DVC 1-4.

It was a fast fourth inning for Cosumnes and DVC with no one advancing in any runs. Second baseman Arzaga had a diving catch out for the Vikings, as pitcher Schuchart had an assist to second and a close call catch at the mound. At bat Mari and Salas both got out at first base and third baseman Esparza struck out.

In the fifth inning DVC’s outfield was working hard, Salas got two outs with one being a diving catch out and centerfielder Walsh catching a deep hit ball out.

Bering first at bat made it to first base as Walsh, Schuchart and Arzaga all got a hit and were out at first base.

Arzaga said, “ This game we did better defensive wise. We did have some errors but overall we are working hard to shut the team down.”

A defensive error at short stop from Mari started the sixth inning, with Walsh got two back to back outs from centerfield. Cosumnes came out strong with two strong hits. With another defensive error by Mari got Cosumnes two more runs in and O’Rourke got the last out with an assist to third.

During the last inning, the Vikings shut down Cosumnes with a fast three outs, but DVC still continued to fight in. With all seven at bats getting a hit, Walsh came out with a hit to left field, making it to first and Schuchart getting a hit to centerfield, making it to first. Arzaga hit to the pitcher getting Walsh out at third. Cassin hit a fly ball getting the Vikings their second out. Hailey hit to the Cosumnes short stop, making it to first and sending Schuchart home. Mari got another hit sending another run in for the Vikings. Esparza ended the game with a hit to second base and out at first, ending the game with the score 4-6.

O’Rourke said, “We started the game rough but at the end we really battled as team to get those extra runs. We are working hard ”

DVC’s next home game will be a double header conference game against Modesto on April 13 at 12 p.m. and 2 p.m.