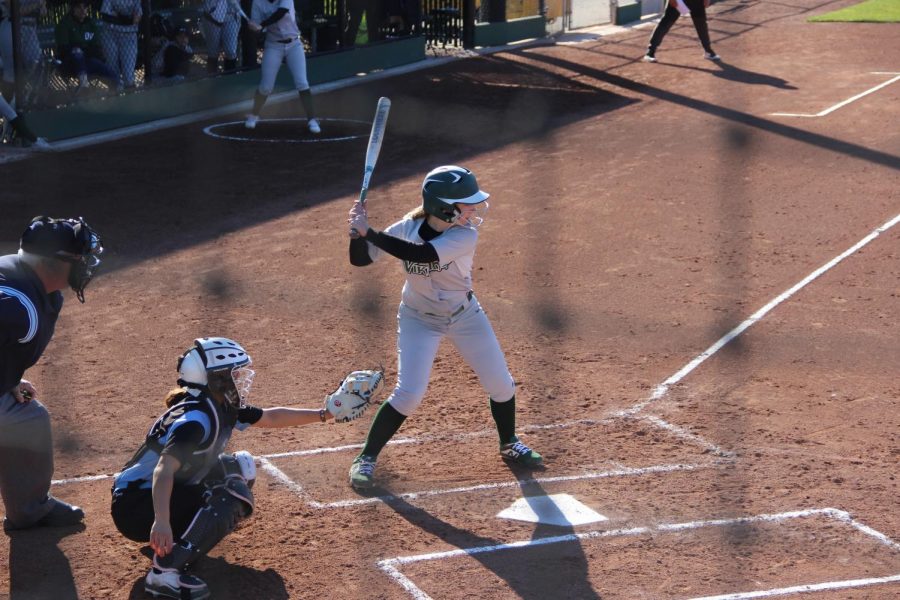 Shortstop Chelsea Mari is up to bat for the Vikings on Feb. 21, 2019. (Samantha Laurey/ Inquirer)

The Diablo Valley College Softball team ended their season against Sacramento City Panthers on Tuesday, playing away and losing in five innings by 4-12.

DVC started the game with an early lead, with short stop Chelsea Mari hitting a single with two RBI’s, bringing first baseman Kathryn Cassin and second baseman Gabriela Arzaga home. The starting pitcher for the Vikings was Summer Throne who gave up four runs and five hits. This ended the inning 2-4, with two on base for Sacramento City.

At the top of the second inning, the Vikings ended early when Rebecca Walsh and Avonikah Salas struck out swinging. Third baseman Mariah Schuchart singled and Arzaga flied a ball out. The Panthers got one run and two hits.

The third inning the Vikings got two hits by Cassin and Mari with no advances. The Vikings had Hannah Kwong sub into pitch, giving up three runs. Mari finished the inning pitching, giving up two more runs.

Though DVC and the Panthers didn’t make any advancements during the fourth inning, in the last inning the Vikings came out swinging, as Mari got a home run with Cassin on base, getting two more runs on the board. Sacramento City got one more run on the board ending the game 4-12.

Mari finished the season leading offensively with a batting average of .439 and SLG of .673. She also had three out of the six home runs the Vikings had for the season, while tying for most hits with her fellow teammate Cassin. Cassin finished with the batting average .439 with 11 doubles and 30 runs scored.