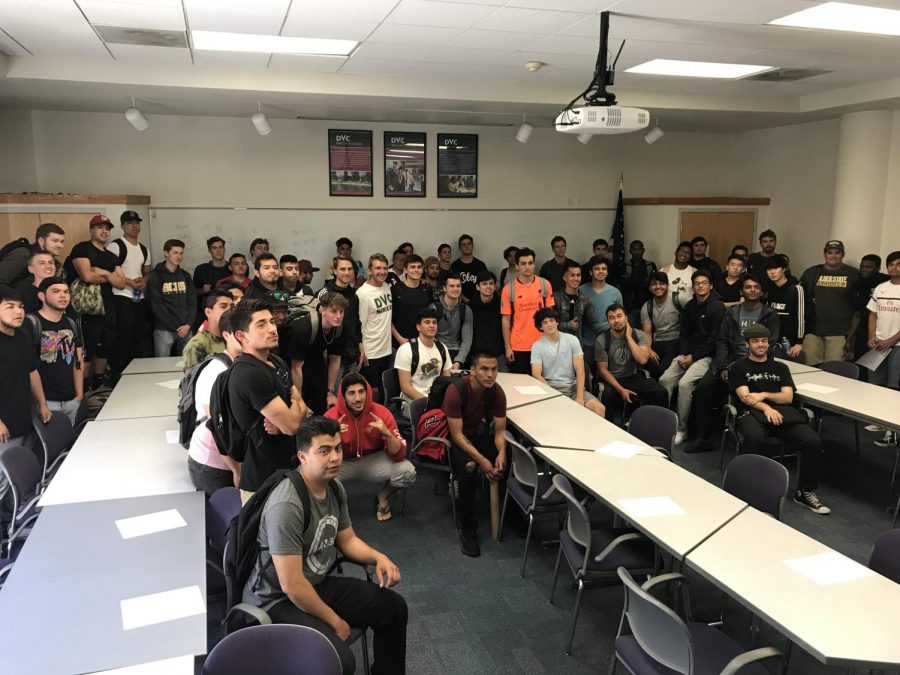 Students interested in joining a men's soccer team at DVC met up in Margaret Lesher Student Union to start the long process of creating one. (Pavlina Markova/The Inquirer)

Prospective members of an upcoming club team met up Wednesday, May 8, all of them with one goal: to be a part of a men’s soccer team at Diablo Valley College.

“I just wanna say thanks for your interest in soccer and thanks for showing up today,” said Alex Lobban, assistant coach of the women’s soccer team at DVC.

Over 60 young men gathered listening to Christine Worsley, the Athletic director at the Pleasant Hill Campus, and Bruce Clementsen, Interim Vice President of Student Services, as they shared the process with them to establish a team.

“Since we’ve never done it, we’re not sure (how to proceed),” said Clemetsen, however, he and others are working towards DVC’s men’s soccer team creation.

The original hope that the team might appear in the next fall semester was shattered by the hard reality of the challenge that the process poses.

“Our job is to do the research in summer, … look at the data in fall. … Then we need to meet with the president (Susan Lamb); that’s the first big meeting,” said Clemetsen. According to him, the goal is to bring this cause to the president “sometime midway through the fall semester.”

If the meeting with the president goes well, the cause needs to be brought up to the district.

Because of the difficulties that lie ahead, “Fall (2020) would be the best-case scenario,” Clemetsen said.

The process will take a large amount of time because creating a new team is “a significant investment,” as Clemetsen said. Clemetsen cited further that the administration needs to “make sure there is a longevity in this and community interest.”

For many who attended the meeting, it meant that even if they fight for the creation of a new soccer team at DVC, they will never be able to join. By Fall 2020, many of them will have graduated or transferred.

“You’re actually laying the ground for the future,” said Neal Skapura, Technology Training and Development Coordinator at DVC, to raise the morale after the prospective players realized that.

Jeremy Bedig, one of the student leaders behind the initiative, also encouraged individuals who were present.

“We all have something in common. We all wanna play soccer (and) this is not going to get done with one or two people, this is gonna get done with everybody in the room,” he said.

For some, playing soccer for DVC means they are not only going to put in the work and try to help towards establishing the new team, but they are considering staying at the college longer, like Erick Moreno.

“Imma try to prolong my stay at DVC,” Moreno said, “I’m really excited, I hope it comes through.”

To Michael Oreja, who is one of the main forces behind the process, the attendance at this meeting was meaningful. Not only the numbers helped towards this process being pushed forward by the administration, but they had a huge meaning for him, personally.

“Man, I’m just so happy that everyone came out… I was so scared that nobody was going to come out,” he said. According to him, a lot of people said that they had classes and other engagements during the time of the meeting, however many of those showed up anyway.

Many of the prospective team members who showed up approached Oreja to thank him personally for the effort he puts into the cause. As other enthusiastic soccer players, he knows that he cannot afford to go through life without goals – and one of his goals is to get DVC a men’s soccer team. Because of that, he said, the words of thanks meant a lot to him and woke a sense of pride.