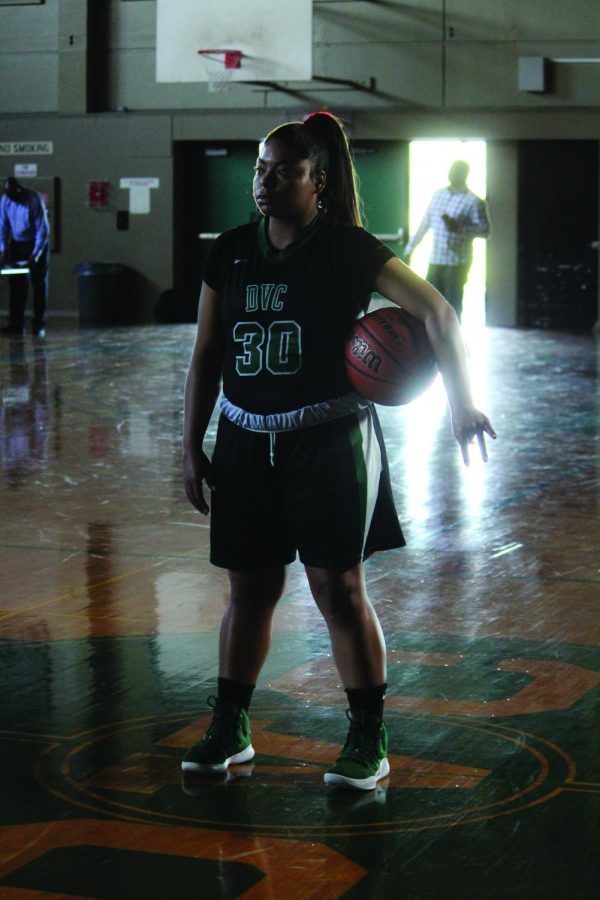 While playing for the Vikings, Jahnay Anderson has broken multiple records proving her versatility as a player. (Emma Hall/The Inquirer).

As a point guard for the Diablo Valley College Vikings, Jahnay Anderson made history on Feb 22 against the Modesto Pirates by hitting 16 three-pointers, in a 138-25 demolition by DVC.

“It means a lot. That’s been one of my main goals is to try to get there and I did it,” Anderson said of the record. “Thanks to my teammates, because without them I wouldn’t have gotten there.”

Anderson was a key part of the Vikings’ regular season, which propelled them into the playoffs. After beating Mission College and Sacramento City College in the early rounds, the Vikings advanced to the Contra Costa College Athletic Association Championship Tournament. The 16-team tournament was held in Ventura March 15-17.

The first matchup in Ventura came against the Ventura Pirates, and it looked like the Vikings were going to make a quick exit in this tournament, as they trailed early. But Anderson stepped up in the second half, and made two free throws that ended up being the difference in the 59-57 victory.

“I was nervous because I hadn’t hit a brick all day,” said Anderson. “But when it’s crunch time, that’s when you show up.”

During the championship game against Moorpark College on March 17, Anderson was the leading scorer with 21 points, including seven three-pointers. The Vikings came away with a 68-61 victory and were crowned state champions; the first ever women’s basketball title at the school. Overall, it is the first state championship for a DVC athletic program since 1977.

“This means a lot. All season this was our goal. We got here. We did what we had to do,” said Anderson. “We came out here and we worked hard as a team. Played together and we got us a dub.”