Power of the Player 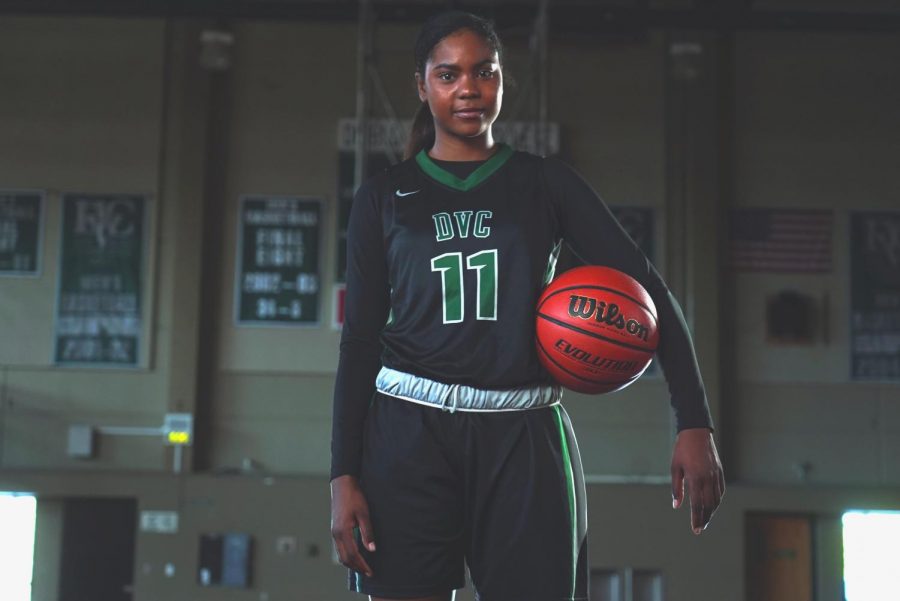 Leilani Moncrease presents many attributes of an all-star and has shined while playing for the Vikings. (Ethan Anderson/The Inquirer).

Like most student athletes, her basketball career didn’t begin at DVC. Although Moncrease began playing at nine, she wasn’t a serious baller until her sophomore year at Moreau Catholic High School, located in Hayward. During this time, Moncrease played on travel teams, where she met her future teammate Jasmine Kong through the Team Superstar club in Oakland.

At Moreau, her basketball career suffered due to a poor relationship with her coach, she said. The team practiced at 4:30 a.m., a time she couldn’t make. Due to missing a single morning practice, the coach benched her for their last game of the season. Unfortunately, this was the match up DVC coach Kameo Williams specifically attended to watch Moncrease. Even though Williams couldn’t see her play, he knew she was something special.

“(Leilani) had something and it wasn’t complete, and I really felt like we could help her as much as she could help us,” said coach Williams. “You have to see beyond the initial physical things. You have to see into a year later, or two years later.”

She developed a close relationship with Williams, calling him ‘salt and sugar’ for his coaching tactics.

“I have a way of giving the sugar, but also the salt. I don’t know what it is, but it allowed us to connect, it allowed her to be able to talk to me,” said Williams, who has become a mentor to Moncrease.

While calm under pressure, Moncrease asserts herself on the court. This manifests itself as an aggressive playing style . However, with friends, she shows a different side.

“To me, Leilani is a very calm but sassy person at the same time,” Kong said. “Cause she’s a very humbling person but say you take food from her and she’ll go off on you.”

Moncrease began attending DVC upon graduating from Moreau. As a student, she takes interest in a variety of different subjects. However, committing to a major has been a struggle. At the moment, Moncrease finds herself wavering between biology, business, and communications.

Every morning, Moncrease wakes up at 7 a.m. to get ready for classes beginning at 9:30 a.m. She has an hour break for lunch after class, spending it with Kong and friends. The two are inseparable, with Kong affectionately calling Moncrease ‘big sister’.

“Outside of the court she’s showing me how to get my classes, get things ready for college, and just watches over me like a big sister,” said Kong.

Once Moncrease finishes by 3:55 p.m., she has another hour gap until 5 p.m. At this point, offseason training begins.

Training implemented by head coach Ramaundo Vaughn and Williams keeps the girls in shape and focused throughout summer and fall. They also bring in fresh recruits to prep with veteran players.

Moncrease’s first DVC season was spent acclimating herself to collegiate basketball. Initially, Williams moved her to the non-starter squad; not as punishment, but as encouragement to reach new heights.

“She started on the starters, then went to white because we wanted to make sure we got out the maximum amount, and it really lit a fire in her,” Williams said. “She went and earned that; nothing was given to Leilani, Leilani went and earned it.”

Between seasons, Moncrease’s commitment to improve showed through goals set by herself and coaches. For example, during games, players were expected to hold opponents under certain scores. At one point in the season, Moncrease regularly expected double doubles in rebounds, knowing she could achieve the feat.

“It always starts on defense,” Moncrease said. “You know sometimes your shots won’t land, or you might not be playing as well, but you can always control your defense and how aggressive you are.”

Along with developing defensive skills, Moncrease improved offensively. At season’s end, she was averaging 14.3 points per game; a huge increase from her 4-point average last season.

“Once (Leilani got acclimated to college basketball), she was a matchup problem,” Williams said. “You put a bigger girl on her, she’s going around her. Smaller girl, she’s just going to score over her. Leilani’s versatility is what she brought to the team.”

Moncrease’s teammates also know how instrumental she is. Kong recognized Moncrease’s contributions to rebounding, setting screens, driving to the hoop, and keeping calm under pressure.

“She’s kind of the anchor of the team, and if you take her off, we wouldn’t be as good as we are,” said Kong.

This exceptional chemistry between teammates was on display all season. The coaching staff also cultivated positive environments, which benefited players. After their only loss, the team rebounded quickly. By the following day, they resolved how to move forward.

“We sat down for an hour the next day to talk about what we can do and how our chemistry was off that game, and then we came back and said ‘we won’t do that again’,” said Moncrease.

Outside the court, Moncrease works part-time at a gym. Taking time to hang with friends, specifically the women’s basketball team, is also a priority for her

“We’ve never fought or bickered, never had drama or anything on the team, we just get along really well,” said Moncrease.

Alongside her basketball dominance, Moncrease has a passion for drawing. Beginning in childhood, she has an Instagram page for her artwork.

Her busy schedule prevents consistent updates, but she still manages to doodle when time permits.

At DVC, she’s proven herself capable of surpassing expectations. Williams believes she’s ready to take on the next level of college basketball.

At the moment, Moncrease has received looks from Division I schools such as Chicago State University and the University of Kansas City. She hopes to transfer with a scholarship.