Starting a new chapter toward success 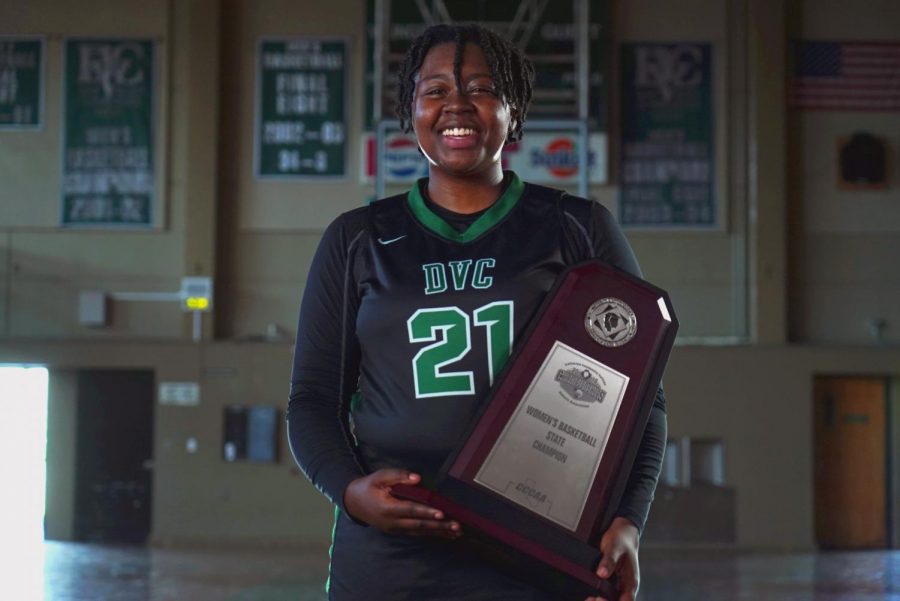 Zahria Hendrix was awarded with MVP honors this season, making her a star on the court. (Ethan Anderson/The Inquirer).

Saying goodbye is always hard, but sometimes necessary. In 2017, Zahria Hendrix was playing scholarship basketball for California State University, Stanislaus as a freshman. Although she had some on-court success, she wasn’t happy with her situation. A personal change of scenery was needed.

Her mother, Karla Nervis, wasn’t too sure about her leaving.

“I kind of felt like she was going backwards leaving a four-year university for a community college,” said Nervis.

But Hendrix decided that if she wasn’t happy at Stanislaus, she didn’t need to be there. She began considering Diablo Valley College after hearing from her former trainer Omar Stewart, who recommended DVC’s basketball coach Ramaundo Vaughn.

The transfer of former teammate Sierra Smith made this opportunity that much more desirable for Hendrix.

“After I found out one of my old teammates Sierra would be transferring there as well, I was sold,” said Hendrix. “I called coach Vaughn shortly after and the rest is history.”

Hendrix has had a huge impact on the court for the DVC. women’s team, in every aspect of the game. She was critical in the Vikings’ deep playoff run, earning CCCAA tournament MVP honors. DVC hadn’t seen a championship since 1977, when baseball won a state title.

She is also someone who eventually wants to repay her mom and sister for their sacrifices, she said.

Hendrix lived in Richmond until she was six, when she moved to Stockton for the remainder of her childhood. At just four years old, Hendrix learned how to dribble the ball in-between her legs, according to her mother

“When she learned how to dribble with skill, I knew at some point she would want to play on a team,” said Nervis.

The feeling of being able to control the ball, hearing it bounce off the concrete and the sense of achievement from making a basket gave Hendrix satisfaction like no other. Basketball has always been a part of her life, she said.

By the age of seven, Hendrix was already attending multiple basketball practices per day, Nervis said.

“She always wanted to play,” said Nervis. “She would put her headphones on, go in the garage and dribble for hours. She always had a goal, even if she didn’t always achieve that goal she would fight her hardest to get there.”

Hendrix was inspired by her family members, who would always watch basketball on TV. This is where the sport first caught her eye, and eventually motivated her to play. Nervis has been taking Hendrix to practices since she was in grade school.

Hendrix one day wishes to play basketball at the professional level, whether it’s overseas or in the WNBA.

Her younger sister means everything to Hendrix, she said, but like many sibling relationships, there is occasional bumping of heads. That feeling tends to fade once the situation cools down, Hendrix said.

“My sister is definitely a source of inspiration in that I want to make sure that all the things that she and my family have sacrificed for me to be where I am aren’t in vain,” said Hendrix. “I want to be able to give back to them one day.”

Women’s basketball coach Ramaundo Vaughn said that he and Hendrix have a “tremendous relationship”. Sometimes the most skilled players don’t allow themselves to be coached because of inflated egos, Vaughn said; but Hendrix isn’t one of those players.

“Zahria, from day one, has allowed me to coach her through the good and the bad,” Vaughn said. “She welcomed herself to get coached, she takes criticism well and has been a good player since she’s got here.”

Hendrix has similar feelings about her coach and their relationship.

“The ways do things shows that he had my best interest at heart,” said Hendrix. “I feel like coach Vaughn was the complete opposite of that and for that reason it changed my experience in college basketball.”

Hendrix plays taller than what she might be seen as. She may not be the tallest but she plays big, never backing down from any person on the opposing team.

Hendrix is listed at 5’8” but you wouldn’t know that from seeing her play.

She plays with a lot of passion and a sense of fearlessness. There are times where she’s going up against centers or forwards that have at least five inches of height over her but you wouldn’t notice it because she doesn’t allow size to get into her way.

She gets very good body position when it comes to dealing with those taller opponents and uses her body well to box those opponents out when it comes to getting a rebound. She plugs the paint getting into the right position to take away the driving lanes to the basket.

Hendrix almost averaged double digit rebounding per game despite her size difference averaging 9.0 rebounds a game this year. Hendrix is a facilitator on the court.

Her playing style is unselfish and could be described as a all around player. She would rather create a scoring opportunity for her teammate than score herself.

Hendrix loves to pass the ball and watcher her teammates score baskets, if she had been having a bad shooting game she contributes to the team in other ways passing, rebounding, and defending. When she’s on the bench you can hear her loud mouthing coaching, encouraging and cheering on her teammates.

“(Hendrix) is a very aggressive player she plays very fast and (has) good defense too she’s an all around great player.” said teammate Leilani Moncrease.

Hendrix earned herself the conference MVP title, averaging 16.6 ppg 9.0 rpg 4.0 apg while shooting 42.7 percent from the field and 34.9 percent from beyond the arc.

She made an impact on the defensive end leading the conference with steals with 59. DVC had a phenomenal season going 27-1 where they went on to make a long playoff run.

“I came here to make a statement and I feel like I did that.” she said.