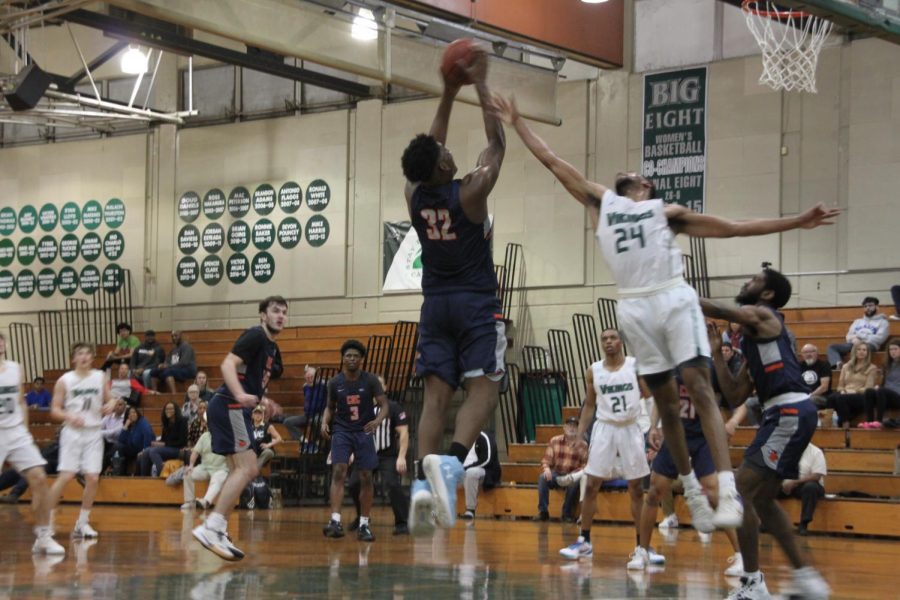 Last Tuesday, the Vikings Men’s Basketball team pulled off an impressive victory at home, outplaying Cosumnes River College for a 74-65 win that brings them a step closer to the conference championship.

“We had some ups and downs, but we pulled it off when it mattered the most,” said Darius Jackson, the Vikings’ starting guard.

Diablo Valley College came into the game playing with high energy and a fast pace. The teams scored back and forth for the first few minutes. When Cosumnes made its first substitution, it was to bring in the 6’9, 280-pound center Dillon Iyawe.

The added size had immediate impact, as Iyawe scored in the paint on his first touch of the basketball. Aware of his team’s lack of size, Vikings Coach Steve Coccimiglio instructed his players to use mobility and quickness to apply constant pressure on the passer, the post and the boards.

Over the course of the game, his advice yielded results.

With 9:20 left to go in the first half, the Vikings held a slim lead at 24-22. Knowing the team’s playoff position was on the line, Vikings sharpshooter Mitchell Smith managed to stay composed, knocking down three 3-pointers to boost the team’s lead to 40-33 by halftime.

“He’s fearless,” said Smith’s stepmother, Debra Smith, who watched the game and noted how her stepson had the hot hand early on.

Cosumnes performed better last week than their 3-9 record showed, especially with Iyawe dominating in the paint.

But with DVC’s star forward, Isaih Hood, having a rough night early on, the rest of the Vikings squad stepped up.

“We try to play through [Hood],” said Coccimiglio. “He’s our leading scorer, leading rebounder… [and] a willing passer.”

In the second half, Hood found his stride as the Vikings sustained their rhythm. He hit a 3-pointer to stretch the team’s lead to double digits with five minutes left to play. Hood then received a questionable technical foul after he committed a hard foul while attempting to grab a rebound.

With Hood sitting out, guards Jackson and Smith kept the game in control. Three minutes before the clock ran out, Jackson got the ball in transition, pulled off a fancy behind-the-back dribble and laid it in to put the Vikings up 70-59.

In the end, Hood checked back into the game with a minute left, and DVC secured the victory at home.

The Vikings are putting up their best season since 2011 – which was also the year they won their last conference championship.

Coach Coccimiglio may be setting the team’s sights even higher.

“We actually have a chance to win a championship,” he said.