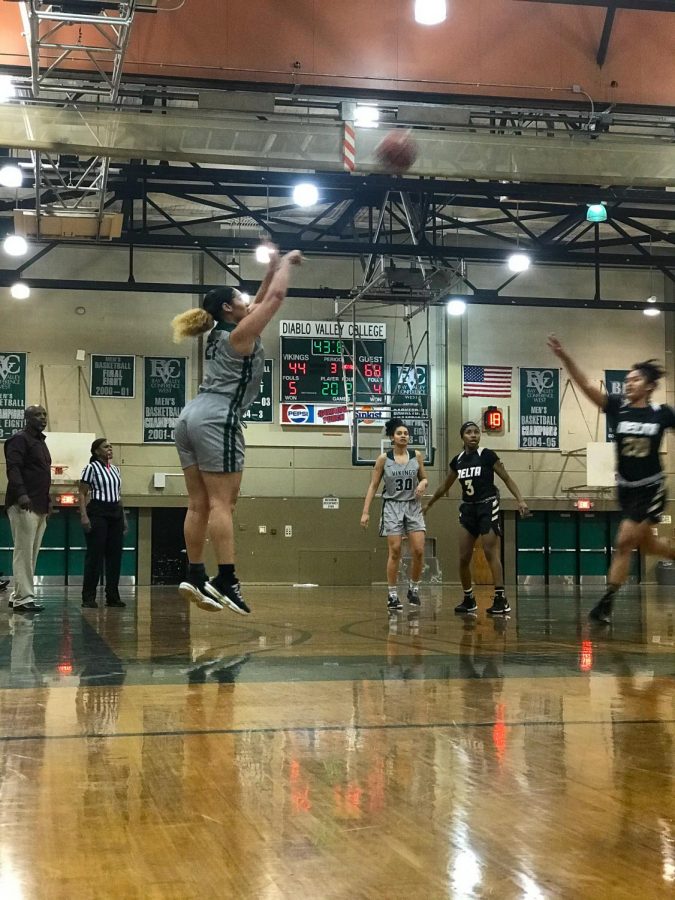 It was a tale of two halves as the Diablo Valley College Women’s Basketball team lost to the number one- ranked Mustangs of San Joaquin Delta College on Tuesday night, 85-63.

The Mustangs rose to a dominant 27-1 record with the win, while the Vikings remained in second place at 20-5 with one game left to play.

Leading in scoring for DVC was freshman guard Ra’Anna Bey with 20 points, while forward Ukiah Ware brought in 12 rebounds and finished with three blocks.

After a slow first quarter in which the Vikings struggled to shoot and fell behind 20-15, Bey and guard Jzane Cavalli-Money exploded for a combined 15 points that brought the team to a 41-41 tie at the half.

DVC attacked with a well-balanced defense early on while the offense pressured Delta.

Speaking before the game, assistant coach Kam Williams said, “We really need to take care of the ball, knock out our free throws, and take advantage of the other team turning the ball over.”

For the first two quarters, the Vikings managed to do just that. But when the second half began, things went downhill.

Multiple turnovers by DVC, as well as an aggressive defensive effort by Delta College, quickly sank the Vikings’ chances. They put up only three points to Delta’s 31 in the third quarter, falling behind 72-44.

The Mustangs never looked back. It was the latest game where a pivotal third quarter decided the outcome for DVC, which was outscored 44-22 in the second half.

The Vikings committed 30 turnovers and failed to hit crucial shots against the top-ranked community college in California.

“It’s just mental toughness,” said guard Nia Johnson. “We have to limit our turnovers and stay aggressive the whole time.”

Johnson said she is confident that if the team can clean up costly mental errors, the Vikings can contend for the state championship, which they won last year.

Their last regular season game will be on the road this Friday against Modesto College (14-10).

With their 20-5 record, second place DVC is headed for the Big 8 conference playoffs. But for Johnson, every game matters.

“We just have to go into our last game of the season strong,” she said.