After a Dismal 1-7 Start, the Oakland Athletics Need to Invest in Their Young Talent 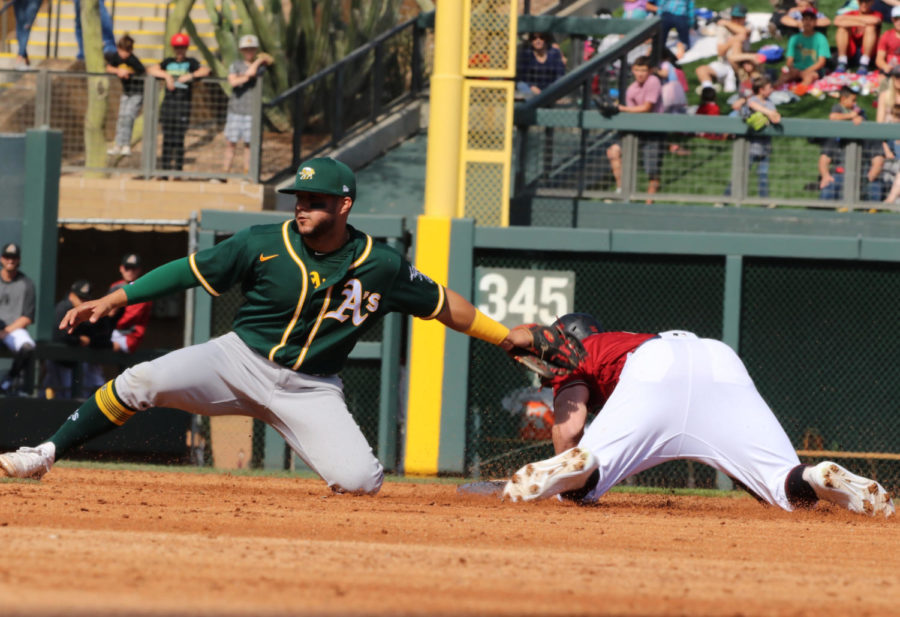 April has been a wild opening month for the Oakland Athletics. The A’s typically start off the season slowly, but losing their first six games – which tied their worst start in franchise history dating back to 1916 – marked a new low for the team.

Yet when all seemed lost, and everything that could go wrong seemed to do just that, the A’s didn’t get discouraged. Now, in a surprise turn of events, they’ve rallied for a shocking 11-game winning streak.

Nonetheless, there are problems afoot. Team chemistry was lacking early on, with both the pitching staff and hitters contributing to the tough losing stretch. The A’s were only able to score 19 runs while giving up 59 runs in their first eight games. In seven out of the eight games lost, four of those were by seven or more runs.

Losing their quiet leader, leadoff man and hometown kid, Marcus Semien, in the offseason, seemed to greatly affect the flow of the lineup and the team’s cohesion. Semien had his best year in 2019, finishing fourth in the league with 123 runs scored, and tied for sixth with 187 hits.

It also pointed to a historic flaw in the club’s management: not spending money for guys like Semien has been the biggest factor in the A’s inability to win a championship in over 30 years. Looking back through the team’s history, it decided to let go of All-Stars Jason Giambi, Miguel Tejada, Matt Holiday, Carlos Gonzalez, Addison Russell, and now Marcus Semien because it claimed that a small-market team like Oakland couldn’t afford these players.

The A’s continue to occupy the bottom half of the league in team payroll, ranking 23rd at just below $90 million. In 2019, prior to Covid-19, 24 major league teams spent over $100 million on team payroll. The A’s front office has never in its history committed that amount of money to keep their young talent. Every time a team leader and star player is let go via free agency or trade, it leaves the team struggling with an identity crisis the following season.

“I think everyone is just looking at themselves in the mirror and asking what we can do better,” said starting pitcher Chris Bassitt after the A’s sixth loss earlier this month. “It sucks to start this way because we know how good we are… It’s not so much a panic, long-term. It’s just embarrassing right now.”

But despite the rough beginning, the A’s didn’t let morale sink too far. “I don’t see a clubhouse where guys are moping around. Just the opposite, actually,” said A’s manager Bob Melvin. “They want to go out there and get a win.”

With a long season ahead, players know things can turn around quickly – and they already have. The spark occurred when the team went on the road for a three-game series on April 8 to face its division rival, the Houston Astros.

To start the season, the Astros had swept the A’s in four games in Oakland. They also beat them in the first match-up in Houston on April 8. But in their sixth matchup, with the score tied 1-1 at the top of the eighth inning, first baseman Matt Olson provided a jolt, launching a 3-run home run deep to right field. Taking the lead and beating the Astros that night would start the A’s current 11-game winning streak.

What the A’s have done is already impressive, and navigating a tough start is familiar territory for the club. Winning 97 games in 2018 and again in 2019, and winning 36 games in a shortened 60-game season last year, proves they know how to win.

In the most recent collective bargaining agreement reached in 2016, the A’s learned that their revenue sharing benefits would be phased out gradually, and gone altogether by 2020. Revenue sharing is when all 30 teams pool their local net revenue and distribute it among each other.

The Yankees, Red Sox, Dodgers, Cubs and Mets are some of the biggest contributors to the pool. The A’s have meanwhile been one of the biggest benefactors, receiving money from it due to their own poor local revenue. It was estimated the A’s received upwards of $30 million annually, during the old CBA, before the 2016 deal meant they would not get any more benefits from revenue sharing.

This led to the team quickly trying to acquire the rights to build a new stadium so it would be able to generate more funding. Building a new stadium will attract more people to the ballpark, producing sellout crowds and boosting the A’s fan attendance, which continues to be one of the lowest in the league.

The A’s will also need to continue to put playoff teams on the field once the new stadium is built in order to help pay for the expenses. Winning sells tickets, too.

To start with, the front office needs to start investing in their young talent by spending more and resigning guys like Marcus Semien – who finished third in the MVP vote in 2019 – to long-term contracts. Making this turnaround would help create a culture where players know they are there to stay, like the team’s former neighbors, the Golden State Warriors, who have held onto Stephen Curry, Draymond Green and Klay Thompson.

Based on their winning streak early on, it’s clear the 2021 team has a special group of players. But something has to change if the A’s hope to bring a championship back to Oakland.