American identity explored in “Clash and Celebration of Cultures” 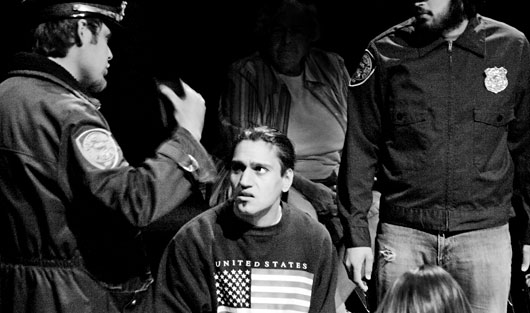 Malik, played by Zarif Kabier Sadiqi, is confronted by two Homeland Security Agents in the play "In the USA" at the Arena theater on Sunday May 4. ()

The Arena Theater at DVC heated up over the weekend with a series of seven plays, the “Clash and Celebration of American Cultures.”

Each of the diverse plays are a representation of the clash of American identities in the 21st century.

The series opens with “Molly Brant: A Play in Voice,” by Alan Steinberg. It tells the story of Native American figure Molly Brant’s attempts to motivate her tribe to hold on to their ancestral land.

The melodic tone of the piece lends a slow start to the series.

It is followed by the unique and enjoyable, “The Miraculous Day Quartet,” by Mary Steelsmith, in which four people simultaneously tell their excuses for being late to the Twin Towers on Sept. 11, their words blending together over a beautiful classical music score.

“Here to Serve You”, the third piece, is the funniest of the series. It takes a darkly comic look at post Sept. 11 paranoia.

“Clash” then shifts gears with the serious and thought-provoking “Veils,” by Tom Coash, which tells the story of two female Muslim college students, from different backgrounds, as they share contrasting views about wearing a hijab.

Returning to a lighter note, “Madrigal in Black and White,” by Patricia Montley, is a comedy about two women who awkwardly develop a relationship, their alter-egos speaking from behind them and exploring social taboos related to race.

“M/21 Bellevue,” by George Holets, is a comedy/drama that takes place in New York City on the M/21 Bellevue bus line. The play explores homosexual themes as a middle-class man reveals his inner conflict between his desire for his wife, and his crush on the male bus driver.

The final play, “By Malik in the USA,” by Jen Sullivan Brych, is set in an English-as-a- second-language classroom in New York City. A Lebanese immigrant gives a presentation on what he has learned in the United States and exposes the difficulties facing immigrants attempting to find their way in America.

The series closes with the entire cast dancing to Bruce Springsteen’s “Born in the U.S.A.”

The seven short plays can only show glimpses of different culture clashes in the political, social, moral, and religious arenas.

“Clash” can at times be confusing or slow, but after the curtain falls you realize you’ve been successfully immersed in the question of who we are in the 21st century.

Performances continue through May 18 in the Performing Arts Center-Arena Theater. Show times are 8 p.m. Fridays and Saturdays, with a 2:30 p.m. matinee on Sundays.

Tickets are $13 general, $10 for DVC student with ID, $8 for students with DVC stickers.