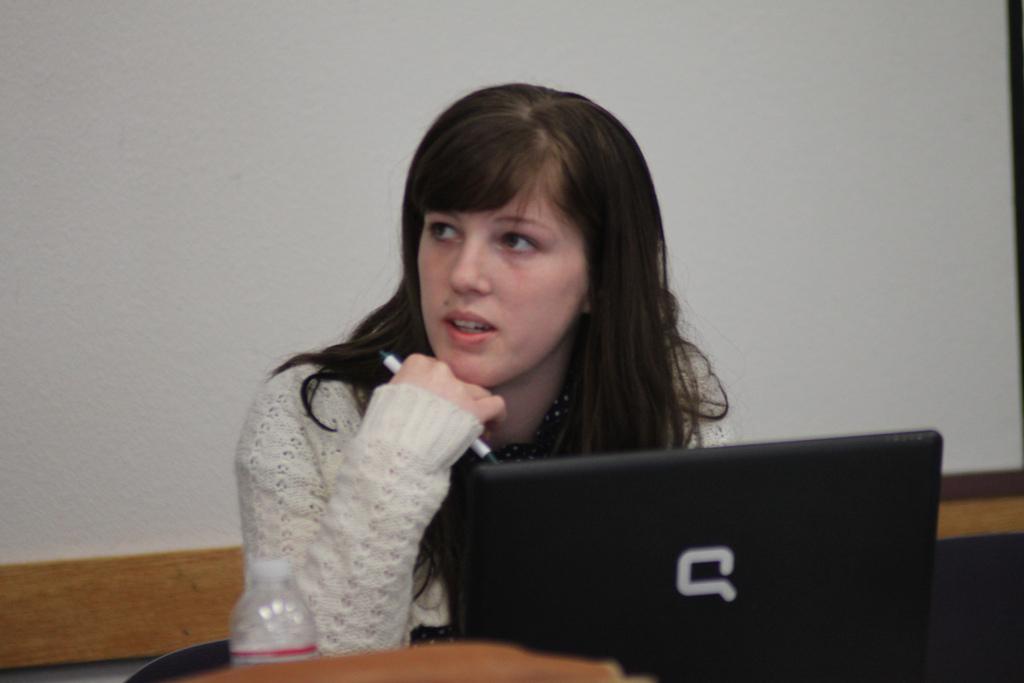 (Photo by Chris Corbin, The Inquirer)

MessmanSexually provocative photographs of the president of the Associated Students surfaced this month when board members and other students received “friend requests” from a fraudulent Facebook profile.

In an interview with The Inquirer, ASDVC President Lindsay St. Hill acknowledged the photographs were of her, although the profile used a different name.

In some of the photographs, St. Hill, 21, is fully clothed or wearing a bathing suit.

In others, she strikes sexually provocative poses while wearing a black bustier or only a thong, her hands covering her breasts.

The photographs used in the fraudulent Facebook profile were taken from websites that are publicly accessible, although one charges a membership fee to view the majority of its content, including hundreds of photos of St. Hill and three videos.

In one of the videos, St. Hill briefly pulls up her top to expose her breasts and pulls down her panties.

“I was very upset at the context they are in,” St. Hill said of the photographs and videos of her on one of the publicly accessible websites. “I mean, there are nasty things on that website.”

St. Hill said she knew the video footage was being taken and received payment. But she would not reveal how much money she made, when the photo shoots occurred or the name of her agent.

“I thought I was advertising products,” she said.

St. Hill said she signed contracts with each photographer, giving them the copyright to all of the images.

“I do regret how these photos are taken out of context,” St Hill said, “but for a while that was my income, modeling swimwear and lingerie to be sold.”

Reached by The Inquirer, Troy Van Cleave, a photograp.+.+her who took some of the shots of St. Hill that ended up on the fake Facebook profile, acknowledged holding the copyright. But he dispu.+ted her contention that the purpose was to sell swimwear.

“No, she wasn’t,” Van Cleave said. “We were doing the photo shoots to beef up both of our portfolios.”

St. Hill said the photographs and videos do not affect her ability to lead the ASDVC.

“I’m not modeling during board meetings,” she said.

St. Hill said the photographs were taken “before I was president, over a year ago.”

But Van Cleave said his two photo shoots with St. Hill were done last summer. And the time stamps on the photographs read July 21 and Aug. 3, 2009, contradicting her statement that she stopped modeling before she was the president of ASDVC.

Aleks Leven, an ASDVC board member, said he received a Facebook “friend request” from “Ashley ASDVC” three weeks ago.  After accepting it, he looked at the profile and found photographs of St. Hill, as well as links to various websites with more photographs.

“I was both shocked and disappointed,” he said.

St. Hill said the profile was a hoax and reported it to Facebook, which had the page removed several days later. She said she filed a report with the Concord Police Department, although The Inquirer could not confirm that fact.

If caught, the creator of the fake profile would likely be charged with “using electronic communication for the purposes of causing fear or harassment,” said Dodie Katague, Contra Costa County deputy district attorney.

This is a new misdemeanor charge created last year and carries up to a year of county jail time, Katague said.

Alex Williams, a DVC student and former ASDVC board member, said he informed St. Hill after getting a “friend request” from the fake profile.

But just days later he received a text message from St. Hill, accusing him of creating the fraudulent profile, he said.

St. Hill denies having accused anyone in person or over the telephone.

“I haven’t made any accusations,” she said.

But Adriana Lopez, student life manager and adviser to the ASDVC, said St. Hill “mentioned a couple of people she thought might have done it” during a one-on-one meeting.

Lopez said she could not act on St. Hill’s suspicions. “To accuse someone of doing something without any evidence, I don’t think is fair,” Lopez said.

Although no one has yet been arrested or charged, St. Hill told The Inquirer she knows who the creator of the fake Facebook page is.

Bill Oye, dean of student life, said he knew about the fake Facebook profile but had not seen the photographs or videos of St. Hill. He said student leaders are held to a higher standard than your average student and should be focused on representing the student body.

“I tell [student leaders],” he said, “to try to make decisions that really inspire confidence, that bring energy to the organization, that attract positive attention.”