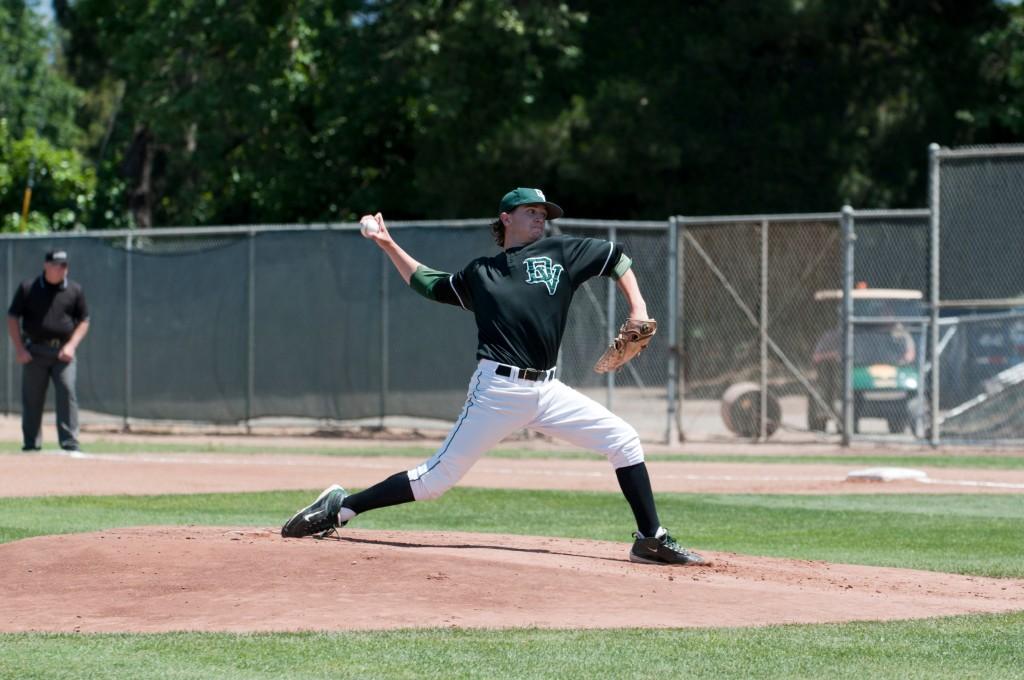 It was a pitching duel for the most part on Friday afternoon when the 15th seeded Consumnes River Hawks sent ace Bryce Shandro to the mound against the 2nd seeded DVC Vikings and their ace Steven Swift.

Led by their starting pitcher, the Vikings and Swift started the game in dramatic fashion. By striking out the side.

“I was pumped up in the first inning, I had a lot of adrenaline pumping,” said Swift.

Shandro and Swift combined for 10 strikeouts through the five innings. The pitchers were both clearly dominating the hitters; it was obvious to the fans and players at DVC that this matchup was going to be a low scoring game.

The Hawks put a run on the scoreboard first, with a double by Ryan Ramirez to left center field that scored Colby Brenner. But danger was adverted when Matt Burks threw out Ramirez at home trying to score on a Matt Gualco single.

“The defense was good, I got in trouble, but Burky’s [Matt Burks] hose to throw out the guy [Ramierez] at home was amazing,” Swift said,

Half way through the sixth inning, as the players were running into the dugout Vikings Head Coach Mike Neu huddled his team together and gave them pep talk. It was quickly evident that the talk changed the mood of the team in the dugout.

The starting pitchers for both sides were both dealing good stuff but in the eighth inning, Hawks coach Tony Bloomfield pulled the trigger and brought in reliever Taylor Herbert.

Herbert pitched a 1-2-3 bottom of the eighth and the Vikings were once again headed into the field behind starting pitcher Stephen Swift for the top of the ninth.

With the score still 1-0, the Hawks, looking to score some insurance runs, tried to manufacture a run by playing small ball, but stranded a runner at second base.

Scott Harkin lead off the bottom of the ninth and hit a leadoff double. Ecstatic, he jumped up from a head first slide into second base with his fists pumping in the air.

After Harkins double, Herbert walked Josh Nuyten and Aaron Hernandez back to back to load the bases for left handed hitter Joe Lewis. Herbert got Lewis looking on a called third strike, and with one out. The job of driving in the game tying and winning runs was up to David Castillo.

“Castillo drove in the winning run from second base on a line drive single over first base into right field.

The Vikings beat the Hawks 2-1 as a result of their ninth inning rally.

The Vikings play the Hawks again tomorrow at DVC, the game beings at 11am. This is the second game in a best two-out-of-three.