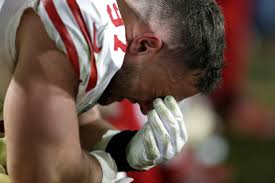 There’s only one word that can describe the reaction of millions of 49ers fans who on Sunday witnessed one of the biggest collapses in Super Bowl history: heartbreaking.

A lot changed in the final 12 minutes, which started with Kansas City’s quarterback Patrick Mahomes throwing his second interception of the game to 49ers’ safety Tarvarius Moore. San Francisco was already up 20-10, and at that point almost every football fan out there must have thought the Niners were within striking distance of their 6th Super Bowl championship.

Even when it was tied 10-10 at halftime, it felt to many that San Francisco was controlling the game. Quarterback Jimmy Garoppolo had already thrown for over 200 yards, and by the end of the third quarter the 49ers running game averaged an astonishing 7 yards per carry. On the whole their offense was moving the ball dominantly, while their defense managed to contain Kansas City’s ferocious passing attack.

To many, at that point, the 49ers seemed likely to win. When Mahomes threw the interception with 12 minutes left to play, Sam Walter, a Diablo Valley College second-semester psychology major and hardcore 49ers fan, thought that was it.

“In all honesty, I felt like that was the game,” Walter said. “You see games every season where when a team is down, especially by 10, and turn the ball over in some way, the game is over at that point.

“Teams can be resilient, but when that happens in the Super Bowl, of all games, it’s damn near checkmate.”

But once the 49ers got the ball back at the 12-minute mark, things went precipitously downhill. Their following possessions resulted in two punts, including a turnover on downs, punctuated by a game-ending interception. For San Francisco fans, the end was gut-wrenching.

“I think it ultimately came down to poor execution,” Crocker said.

“The 49ers had been sound all season and made the plays necessary to close out games. So I won’t put the loss on one person or group. As a whole, they just fell apart within the last seven minutes of the game.”

Alan Bergum, whose daughter Emma attends DVC, has been a 49ers follower since the 1960s and said he couldn’t help but watch in disbelief, even shedding a couple of tears as his team melted away a 10-point lead in the final six minutes.

“Out of all of my years as a 49ers fan, this might have been the worst loss I’ve experienced, and I’ve seen quite a few disappointing losses in my lifetime,” he said, describing the emotional roller coaster on Sunday.

“Yea, it was a thrill ride, I couldn’t be prouder of those guys out there on the field,” Bergum added. “I’ve gotten to witness some of the greatest teams in franchise history, from Joe Montana to Steve Young, and yet I’ve never seen a team so close and tightly knit as a unit and a family.

“These guys will be back again, I know it.”

Garoppolo’s performance in the fourth quarter was one of the major factors contributing to the team’s loss. He only completed three passes out of 11 attempts – an abysmal 27 completion rate – for a meager 36 yards. After posting a 7-1 record in fourth quarter comebacks this season, Garoppolo failed to work his magic and lead the team to its first Super Bowl victory in a quarter century.

Even after the 49ers loss, Crocker still had high hopes for the team.

“My confidence level going into next season is extremely high,” he said. “The core group of the team will be back. With young play makers on offense and defense, I see the 49ers once again competing and winning the West. [Head Coach] Kyle Shanahan and [General Manager] John Lynch have built a solid foundation.”

Ending the season with a 13-3 record, the 49ers defied expectations. Last year they ended with a record of 4-12 and were given just a 1/40 shot of making the Super Bowl in 2020. The 49ers became only the third team in NFL history to make the Super Bowl after winning four games or fewer the previous season.

For fans like Bergum and Walter, as hard as it was to endure Sunday’s loss, next season can’t come soon enough.