With Playoffs On the Line, Women’s Basketball Team Dominates Against the Hawks 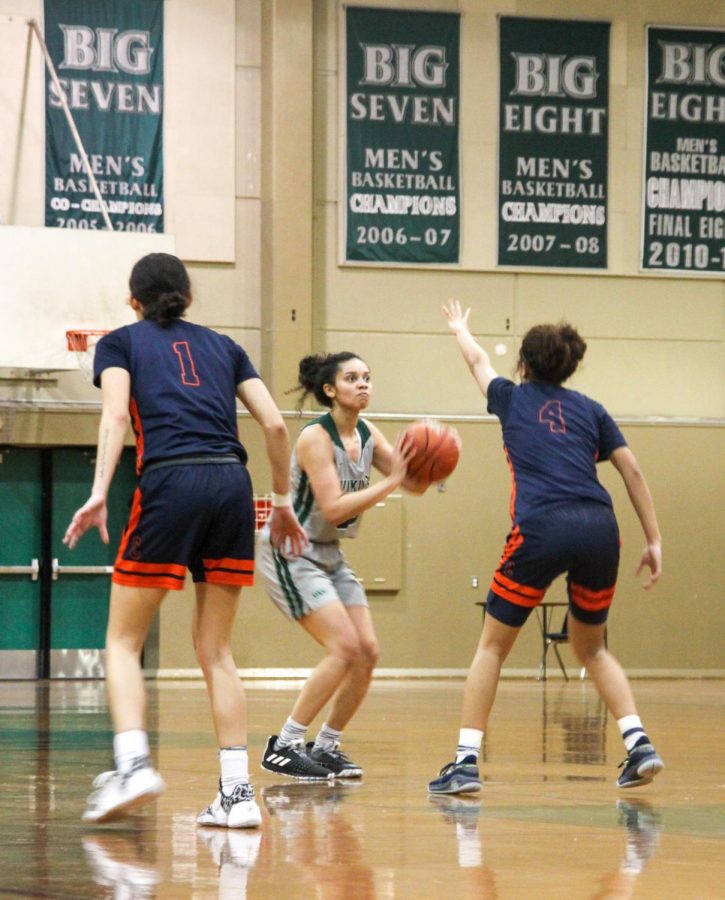 Nia Johnson is seeking another championship for the DVC Vikings (Anthony Perry/The Inquirer).

With playoff position on the line, the DVC Women’s basketball team beat the Cosumnes College River Hawks 83-52 Tuesday at home.

Guard Nia Johnson lead the team with 30 points, while forward Ukiah Ware finished with a double-double, scoring 18 points and 12 rebounds.

After this victory, the women’s team is only two wins behind San Joaquin Delta College for first place in their division.

Johnson, who leads the Vikings in scoring this season, said she relishes the opportunity to be in the playoffs again. She’s seeking her first championship and another one for the team.

“After the team won last year, I would love to win it again for a second year in a row,” Johnson said.

Second Assistant coach Matt Johnson, who has been with the team for 10 years, believes that this season has presented a different kind of challenge.

“Last season, more than half the team (were) sophomores, so they had experience playing with each other,” Johnson said.

He also said that although the team’s record is solid, inexperience can play a role in games ending with close scores.

“We have a good amount of freshmen and players who haven’t played with each other, so it can definitely be a challenge at times, but this team has been getting the job done,” he said. According to Johnson, the majority of the team this season is new, which can result in chemistry issues.

The team’s record stands at a dominant 20-4. On Thursday, they play against American River college on the road. Next week, they have an important game against Delta College, the number one team in the state.

Considering the playoffs, coach Johnson said how the team fares against Delta could determine if they’re ready for another championship run.

“The upcoming game against Delta will be huge, I think that will give us a good idea of where the team stands and what we may need to work on,” Johnson said.