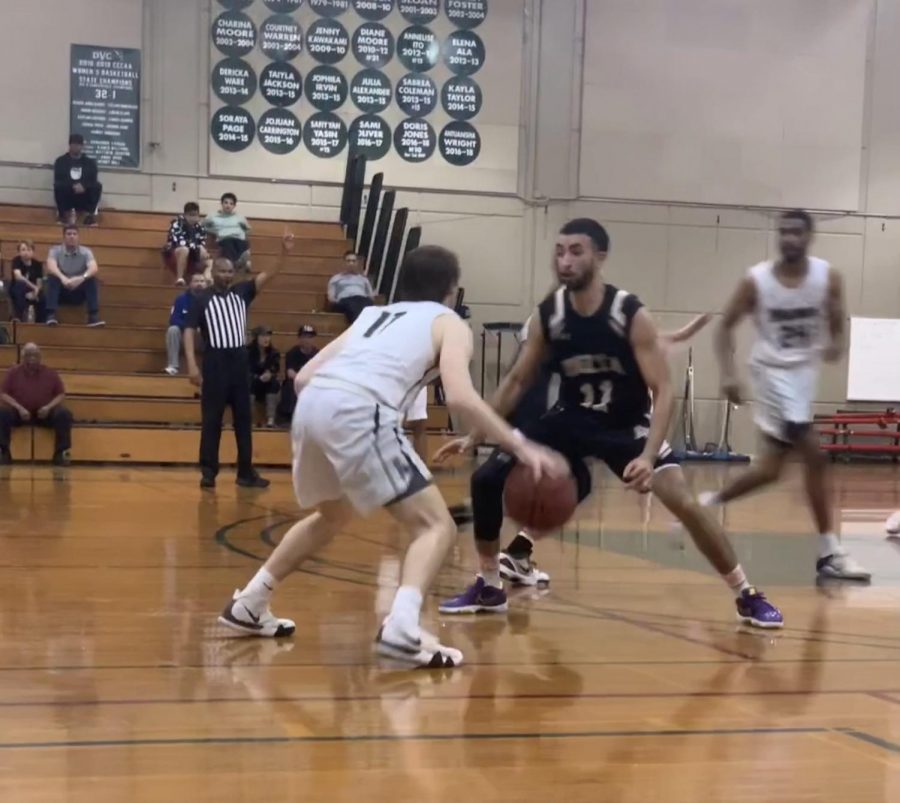 Mitchell Smith about to pass the ball to a teammate (Marlo Miguel Guevarra/The Inquirer).

The DVC Men’s Basketball team fell short 73-67 to the San Joaquin Delta Mustangs at home on Tuesday night, hurting the Vikings’ chances of earning the first seed in the Big 8 Conference.

When asked what he told his players after the loss, Vikings’ Head Coach Steve Coccimiglo bluntly replied: “The truth.”

“We did not execute at all,” Coccimiglo said. “This game was an opportunity for us to win a (conference) championship this week and we completely broke down in terms of execution and decision making.

“We literally fell apart in the second half.”

Parades hit a string of outside shots boosting the team’s lead to nine points going into the second half.

But the tide would quickly shift. The Vikings’ offense slowed down as the Mustangs started to heat up from the three-point line.

San Joaquin Delta’s star guard, Travis August, inflicted the most damage as he took over the game late in the half.

“That kid (August) went off … hell of a player,” Coach Coccimiglo said about Delta’s top scorer.

Meanwhile, the Vikings’ leading playmaker, Isaih Hood, seemed relatively quiet after facing high defensive pressure in the post and receiving some unfavorable calls from the officials.

The Vikings would struggle all night with the officiating, but Coccimiglo said it was no excuse for his team’s lackluster performance.

“(The loss) had nothing to do with the officials. I mean, we missed opportunities, we didn’t defend the way we could have, we closed bad on drivers,” said Coccimiglo, who pointed to bad offensive possessions, turnovers, unnecessary fouls, and poor defense for the defeat.

The Vikings are a half game behind the Santa Rosa Bear Cubs for first place in the conference with one game remaining for both teams.

The only way DVC can capture the first seed is to win its last game at Modesto College on Friday night. At the same time, Santa Rosa must lose its final game against Cosumnes River College, which would make the Vikings and Bear Cubs co-champions.

For Coccimiglo, the Vikings still look to finish the regular season strong with or without placing first.

“We’ll watch film and prepare for our next game,” he said. “It’s still a meaningful game.”