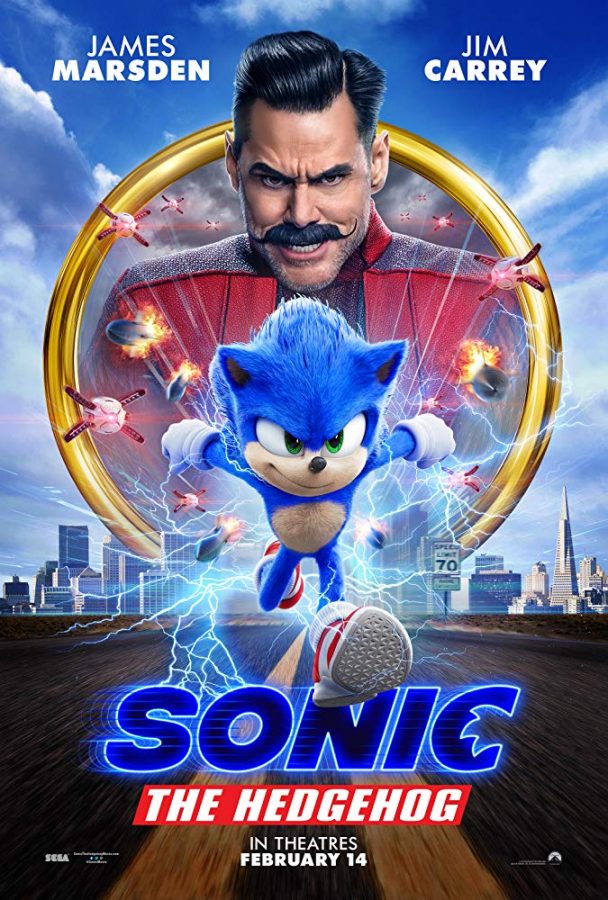 “Sonic the Hedgehog” sped its way into theaters Feb. 14, collecting its rings after the damaging first trailer left people spin dashing away. (Photo courtesy of IMDB)

“Sonic the Hedgehog” sped its way into theaters Feb. 14, collecting its rings after the damaging first trailer left people spin dashing away.

After Paramount Pictures received backlash for the film’s monstrous original design, it gave Sonic a new coat. This upgraded version of the blue blur is much more friendly and faithful to the video games the film is based on.

The film’s plot is simple but was unique enough to catch me by surprise. Sonic, an alien hedgehog with extraordinary speed, lands as a baby in a small town in Montana called Green Hills. Many years later, he accidentally exposes himself by running so fast that it causes an electromagnetic pulse.

This shuts off electricity to much of the U.S., causing the government to send in the villainous Dr. Robotnik (played by Jim Carrey) to find the source of the mass power outage by any means necessary.

What I expected from the initial previews was a “fish out of water” story where the protagonist is forced into a new area and must either get back home or embrace his surroundings.

This is not the case for Sonic because in the film, he has spent years on Earth, and he thinks of Green Hills as his home. The residents even made him an urban legend around town known as the “Blue Devil.”

I am glad the filmmakers diverged from this cliche because it is the usual storyline of movies in which cartoon characters cross over into live action. Some examples are “The Smurfs” (2011), “The Adventures of Rocky and Bullwinkle” (2000), and “Alvin and the Chipmunks” (2007).

The acting helps the movie level up above other hits like “Birds of Prey,” which flew under the radar after “Sonic the Hedgehog” came out of the blue. Ben Shwartz is a great choice for Sonic’s voice, making the hedgehog witty and childish without being overly obnoxious.

James Marsden, the sheriff, is the perfect buddy to Sonic because he has an adult authority, but often gives in to Sonic’s zany ideas.

Carrey, who plays Dr. Robotnik a.k.a Eggman, is the stand-out of the cast, with his legendary goofy personality in high gear. His performance is nostalogic of his work in the 1990s and early 2000s. Whenever he is on screen, he never fails to crack me up.

The comedy is hit or miss. Some jokes land really well, but some are a bit too childish for an adult to enjoy. For example, Sonic does a dance move called “flossing,” which is a trend among the youth that has been around since 2016, but might fly right over the heads of older viewers.

Overall, “Sonic The Hedgehog” is a good time for children and fans of the franchise like me who grew up playing the original video games. I recommend you see this movie while it’s in theaters.