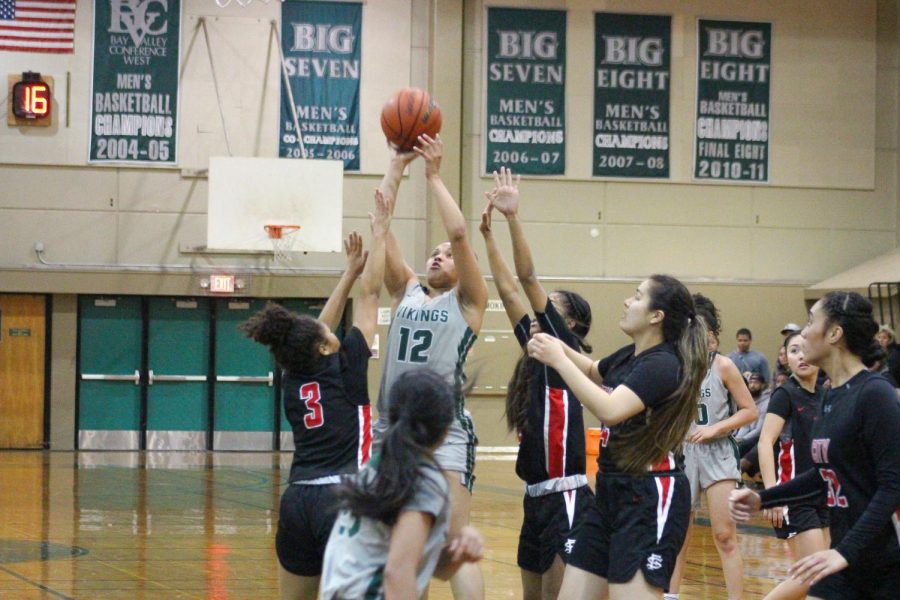 On Saturday, March 7, the DVC Women’s basketball team beat the San Francisco City College Rams 77-63, locking their position into the Elite-8 with a chance to win the state championship for the second year in a row.

In the past month, the Vikings have experienced hardship due to the sudden departure of head coach Ramaundo Vaughn, who was placed on paid administrative leave by DVC with no explanation.

Because of this, assistant coaches Kameo Williams and Matt Johnson have been leading a savvy women’s team that has dedicated their playoff run to the former head coach.

Even though coach Vaughn’s absence has caught the team off guard, Williams believes that the Vikings are not only locked in to win the championship, but playing at their best for Vaughn, who’s coached them for 10 years.

“Being assistants to Vaughn for a long time, we’ve gotten a different view on how Vaughn (coaches),” said Williams. “That’s lead us… to put the team in the best position to win.”

Since Vaughn left, the Vikings have only lost one game, thanks to the assistants being able to run the system Vaughn has implemented successfully for years.

Williams also credited the team’s ability to adjust to the system while Vaughn has been gone, stating that they control their play as a team, while still being able to uphold Vaughn’s style of play.

It was an exciting and emotional game for the Vikings, as they went back and forth against the Rams in a game that featured multiple lead changes throughout. Leading the charge for the Vikings was Yanira Gabourel, who scored 16 points off the bench and single-handedly brought the team to life once the fourth quarter began.

Gabourel, whose teammates refer to her as “Taco,” scored 11 points in a three-minute span, which was the key factor into the Vikings’ victory against the stingy Rams. When asked where that spark came from, she said it was her team’s ability to trust her with the ball to get the job done.

“It was my team, they wanted to get me hyped up and it worked,” said Gabourel. The Vikings rallied around Yani, as she dominated the game once the fourth quarter began.

She also said that the team was able to catch on to the way the Rams played offense and defense, an adjustment that helped the Vikings claim victory.

Gabourel, like coach Williams and Johnson, repeated the same sentiments regarding her and the team playing for coach Vaughn.

“As a team, we knew this game meant a lot for coach Vaughn. We just wanted to go out there and play our hardest for him,” Gabourel said.

With the playoff stage taking shape, the Vikings will look for their second championship, heading down to southern California to face No. 3 seeded Ventura College on Thursday.